Earlier last year we had managed to get our hands on two tickets to Corfu in a budget airline sale for middle of May.

Corfu is the second largest of the Ionian Islands and particularly beautiful because it houses many ruins of medieval castles and features lush green landscapes. Corfu is historically important as it was one of the bulwarks against the invasion(s) of the Ottoman Empire. The old town of the capital city (also called Corfu) is also UNESCO World Heritage site.

We arrived very late on Thursday night and had booked a simple hotel directly near the airport to start fresh the next morning. The airport is not very active and there are some okay-ish hotels (for one night) in walking distance. Skip booking breakfast, instead go to one of the very beautiful cafés at Leof Democratias.

The next morning, after having a long coffee / breakfast with a nice view, we went for a stroll along the pier and up to the Old fortress. The area is quite big and beautiful. You can spend some hours just walking along or sitting enjoying the sun. The music department of the Ionian university is located in the old venetian fortress and we were lucky and got a seat on a bench outside and could listen to the students practicing. Don’t miss that! (Note: There are two fortresses, the old and the new. In this case “new” also means 400 years old 😉 I did not like the new one – if you are short on time, [not recommended].) 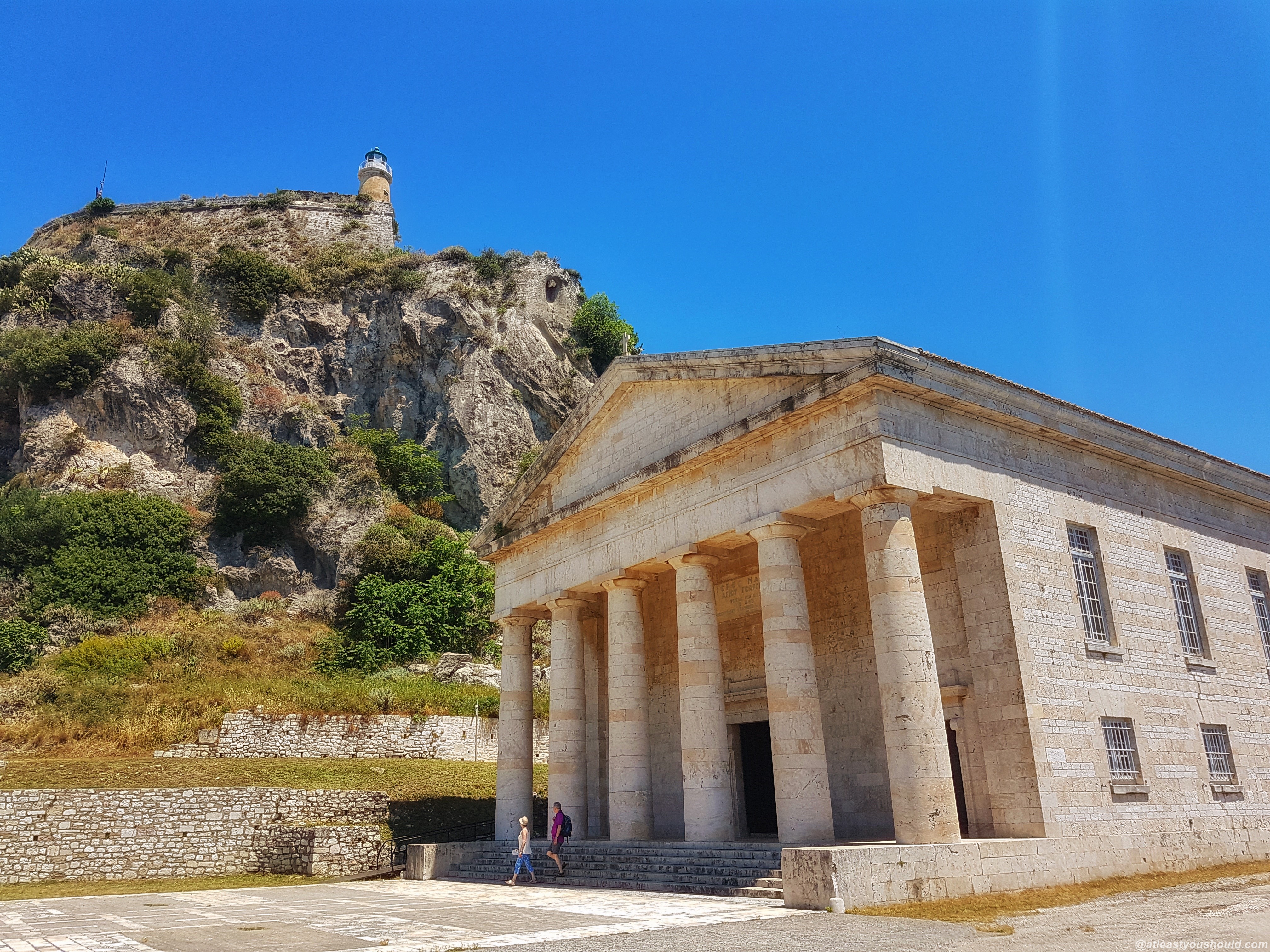 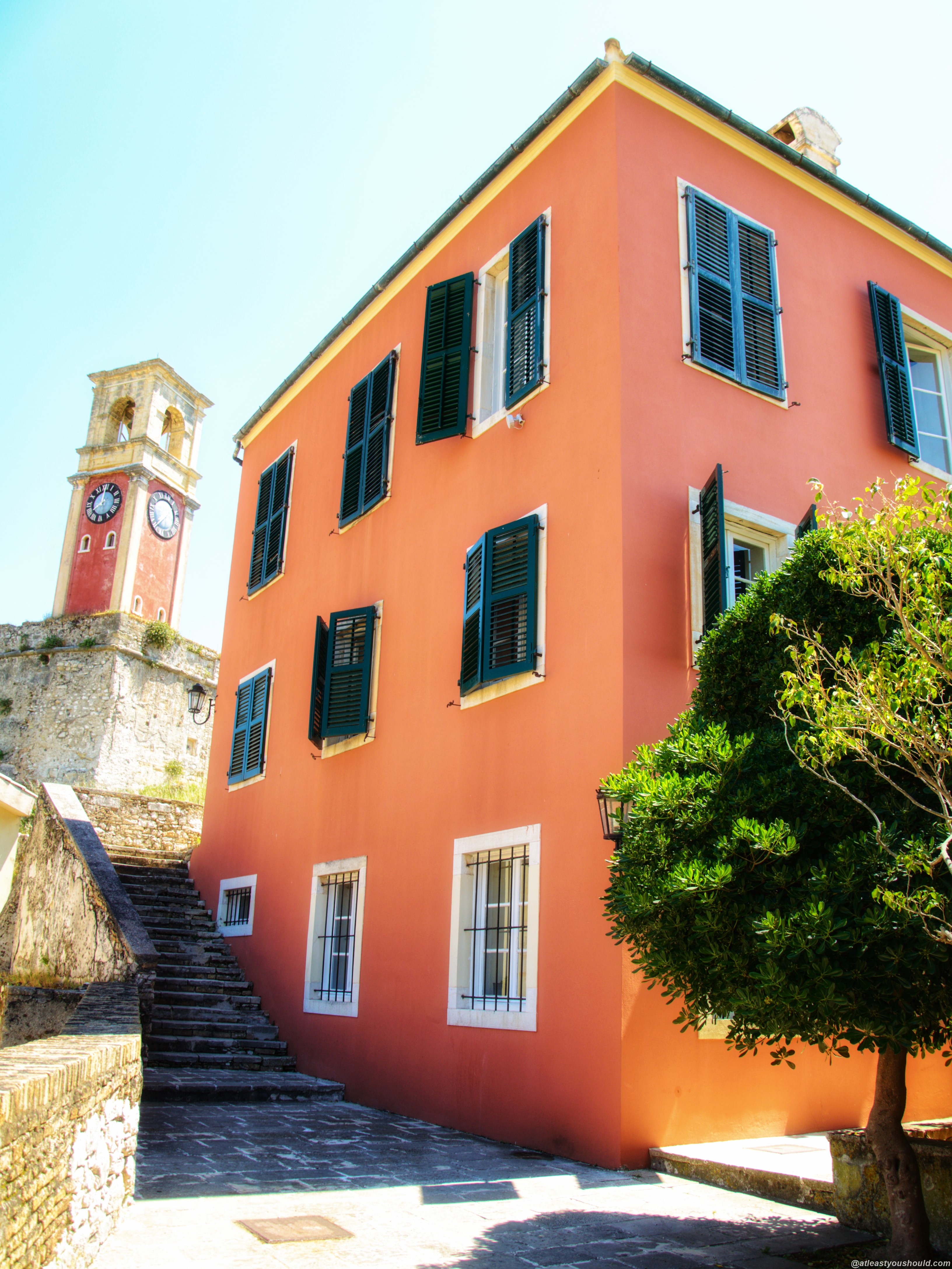 Around noon we went down to Faliraki. There is a nice café (En Plo) directly at the waterfront and when its warm enough, there is a free swimming area directly adjacent. It was quite cool but still warm enough in May to go for a swim. 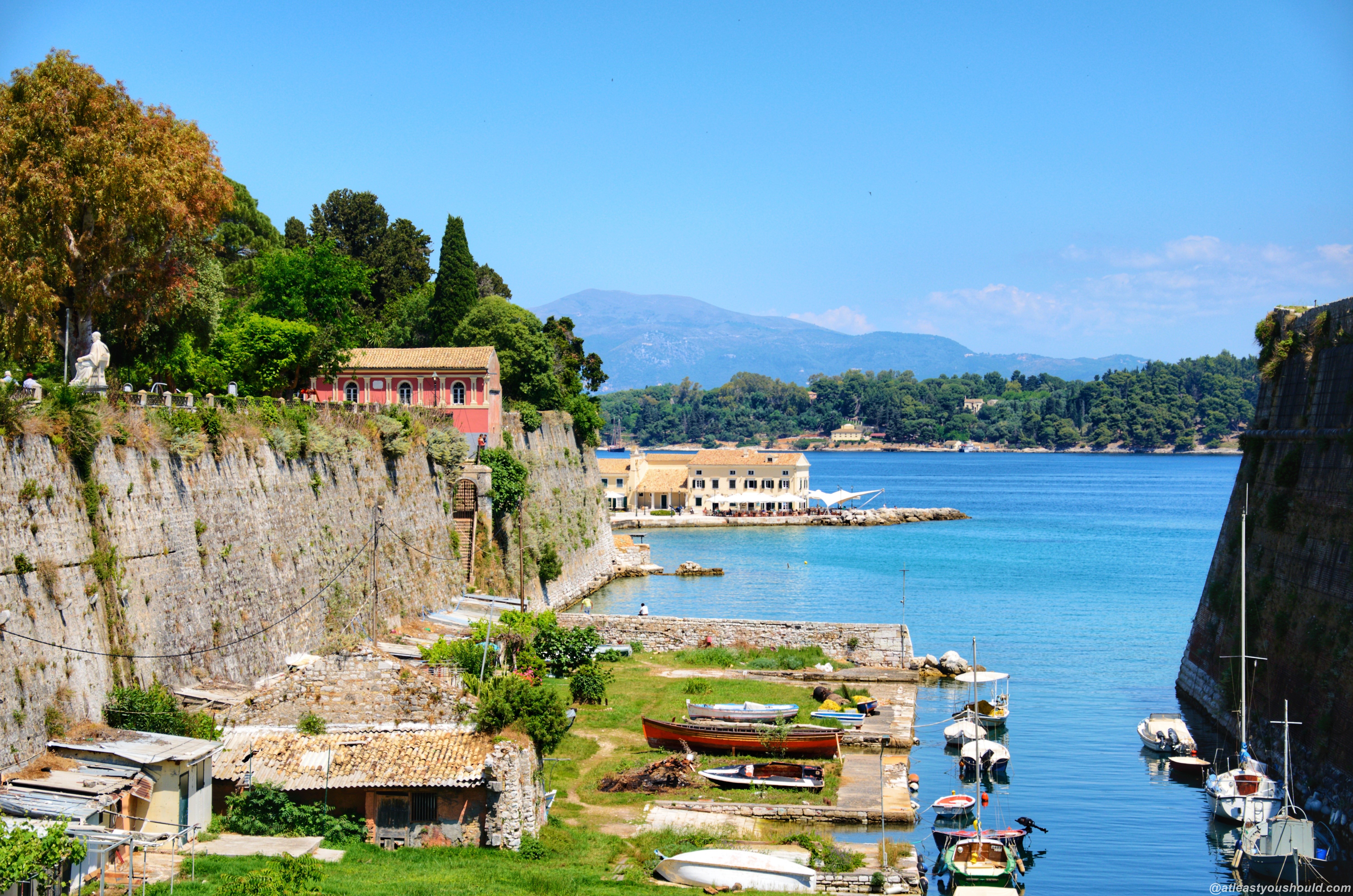 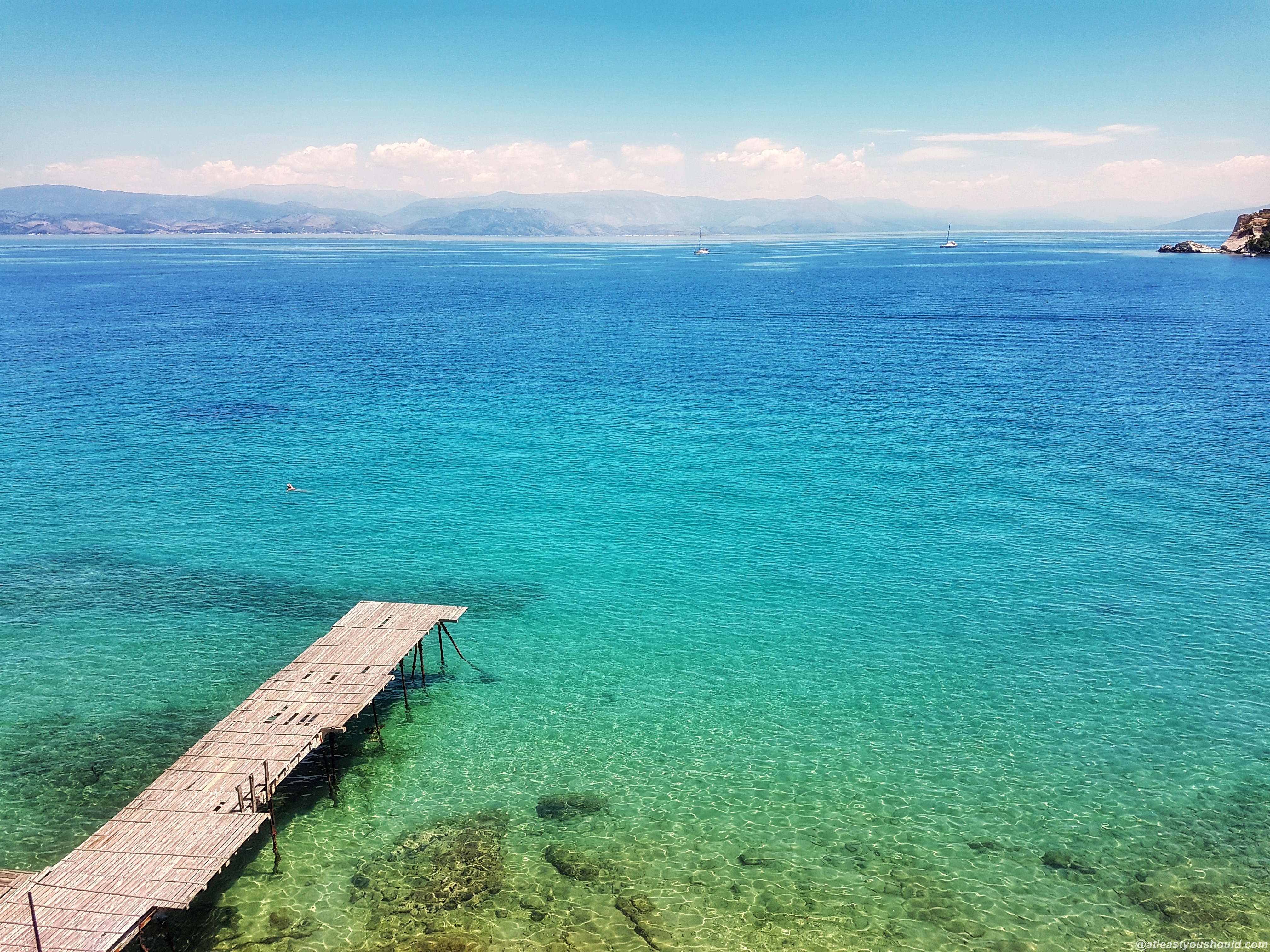 After lunch there we headed for the Old Town and strolled through the different streets until it was early evening and we went to get our rental car (you really need one on the island) and off towards Ipsos in the North, where we had booked an apartment. Ipsos is quite good as a base, it is reasonably cheap and you can reach all of the island within reasonable time. Many people also book directly in Palaiokastritsa. After arriving at our apartment, we took a quick walk down to Ispsos Beach and watched the sunset. You can buy fresh fruit for great prices. Definitely recommend doing that. Ipsos beach is probably quite touristy in peak season, but May is off season and it was nice, slow, and quiet. 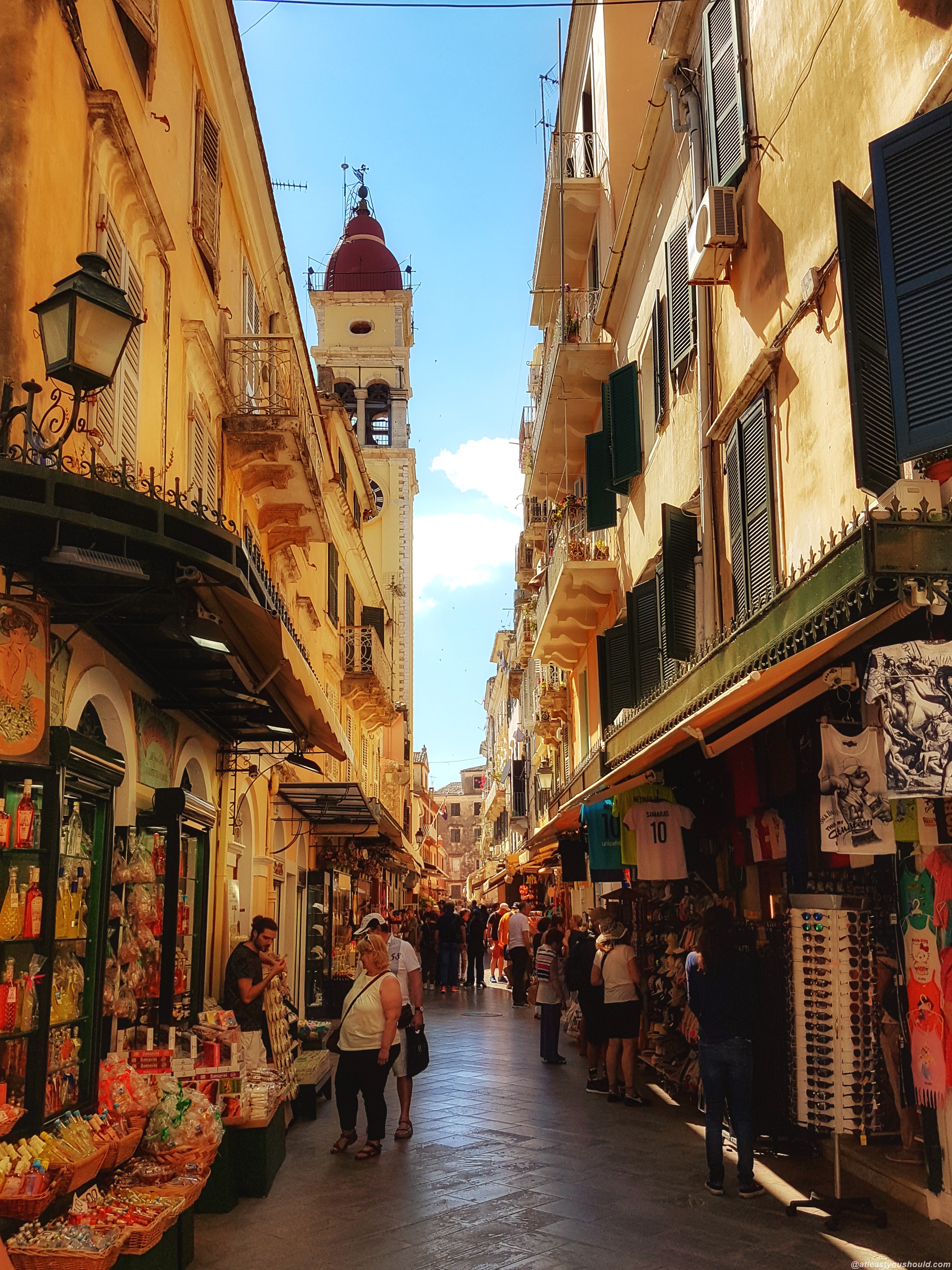 On the second day we went further north to Akra Drastis near Sidari. The hike up and down to the swimming area called Canal d’Amour is easy and beautiful. You should really go for a swim – because according to legend all unmarried women will find the perfect partner afterwards… 😉 Also look out for butterflies on the path. Plan approx. 1 hour if you go just for the views. 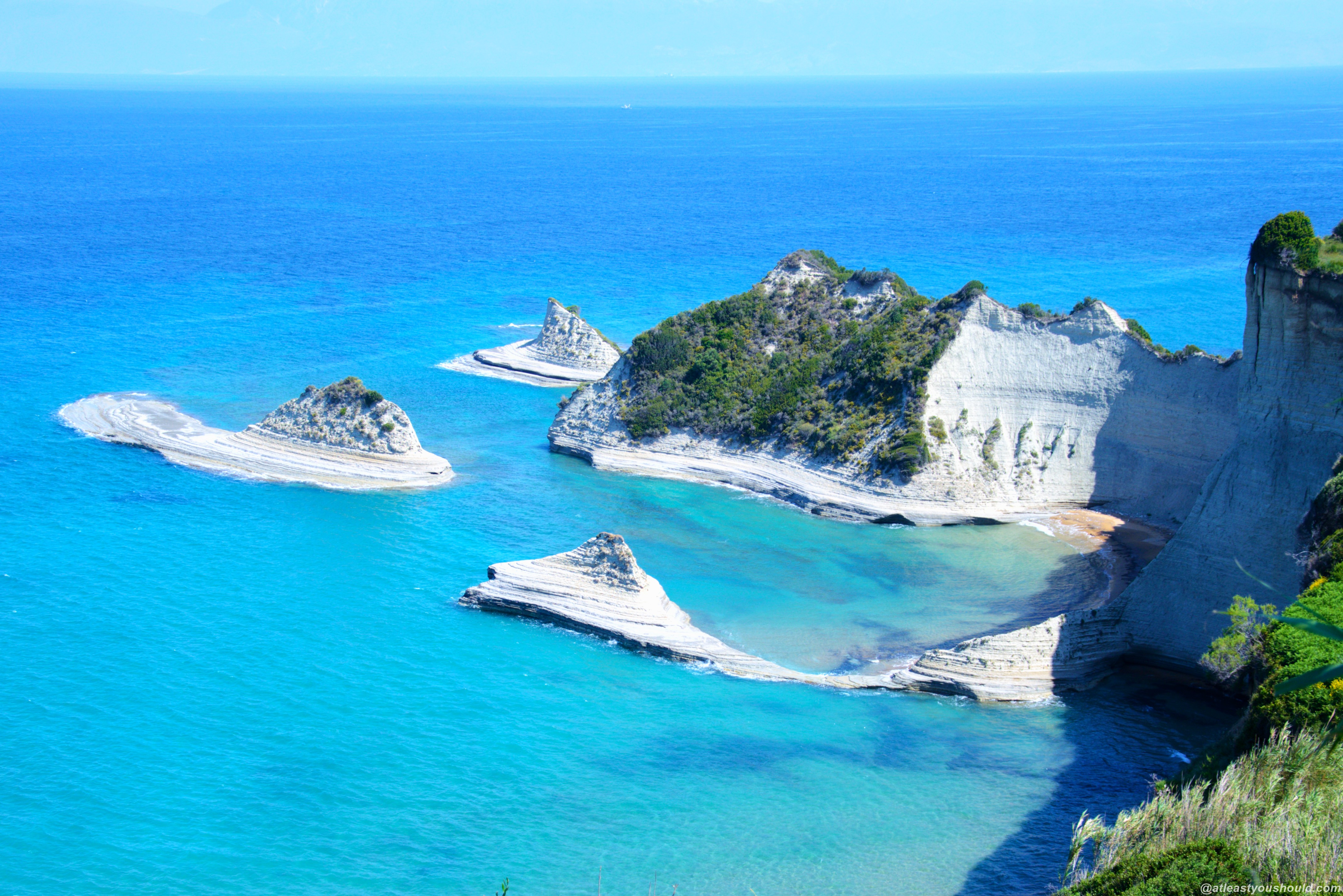 We continued to drive counter clockwise around the island, with the next stop in the Bay of Agios Georgios. Even though it is very popular, I actually did not like it that much. It felt touristy. The beach is sandy and nice though. Maybe because it was spring and it is better in summer. But the view of the bay from above, in the southern hills, is beautiful: 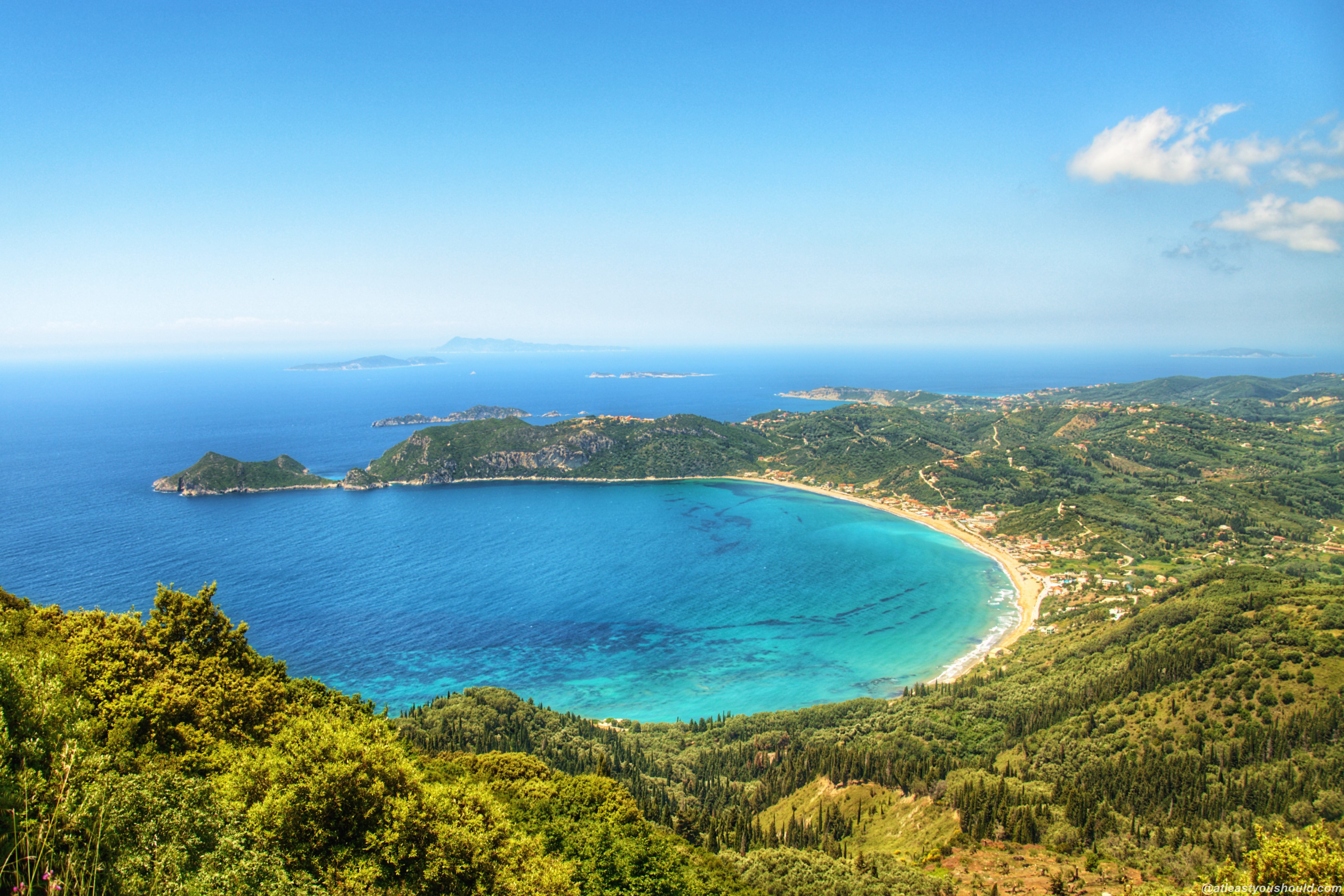 Onwards to Palaiokastritsa and Angelokastro. You pass through forests of cypress and olive trees on the way and it is a really nice drive.

Angelokastro is an old byzantine fortress and quite impressive. It is unconquered throughout history. We stayed a while at the castle (there is a nice viewpoint with a café) and then went down the hilly roads towards Palaiokastritsa – According to legend the place where Odysseus was washed ashore and met Nausicaa. 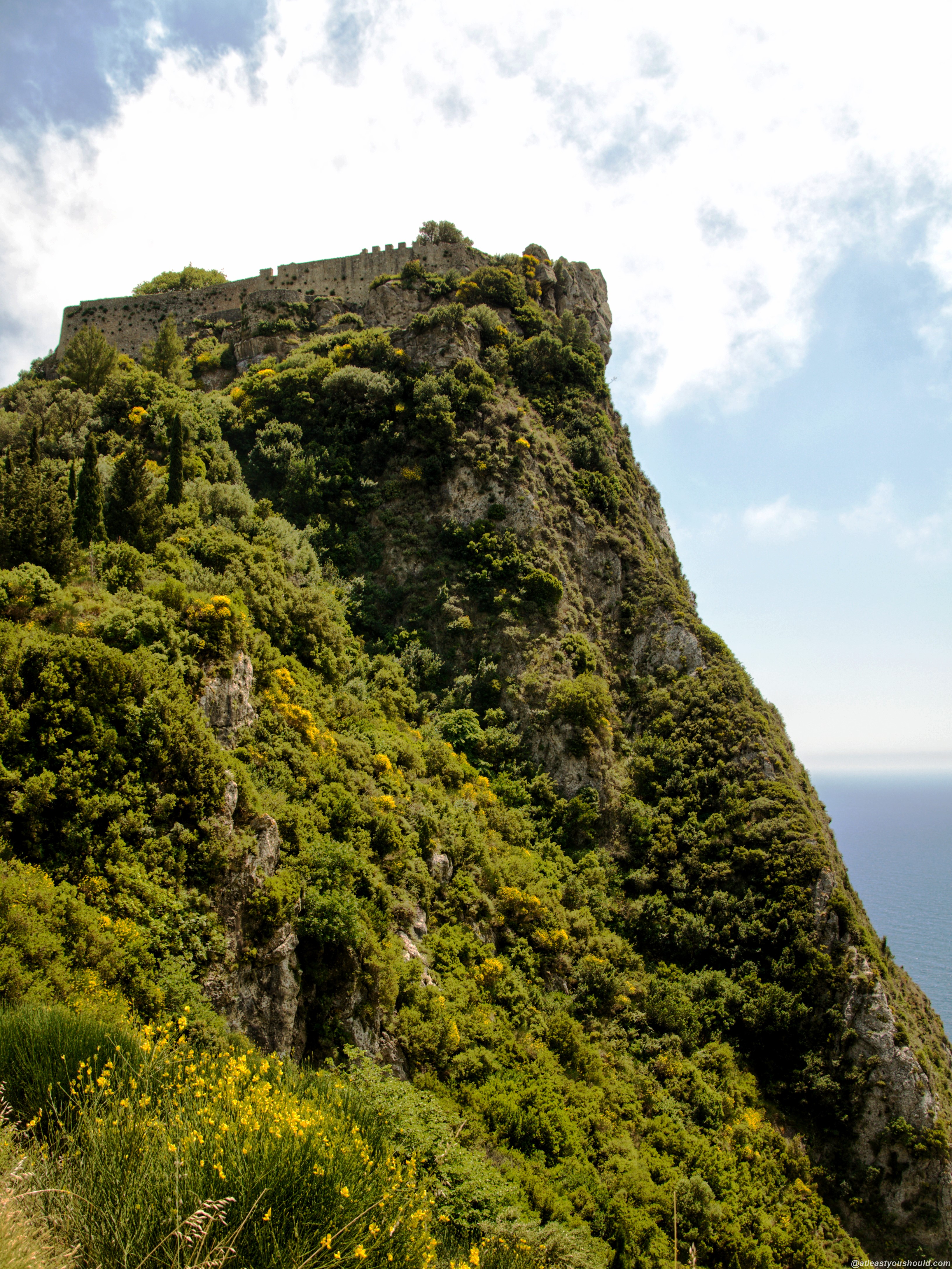 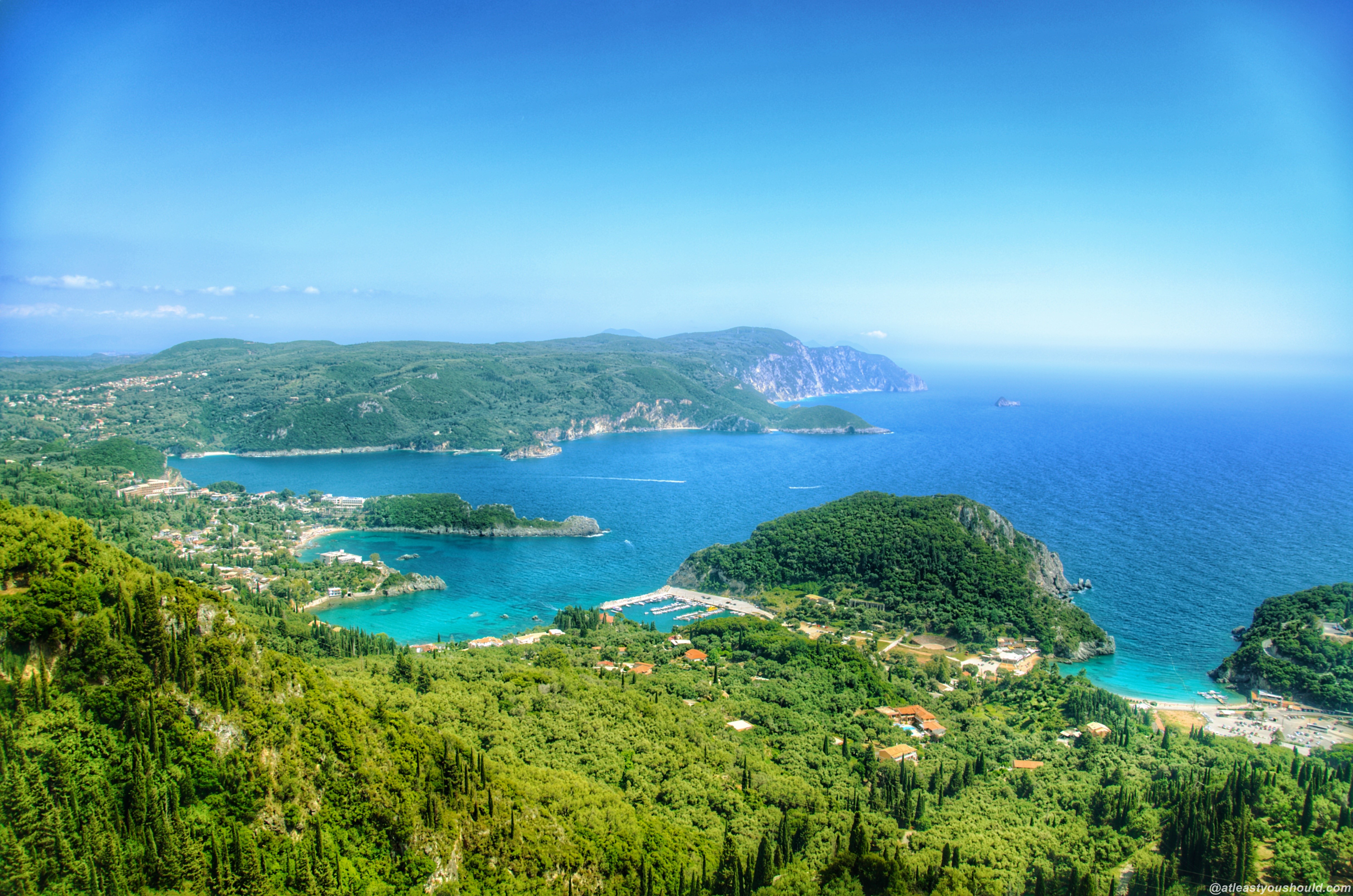 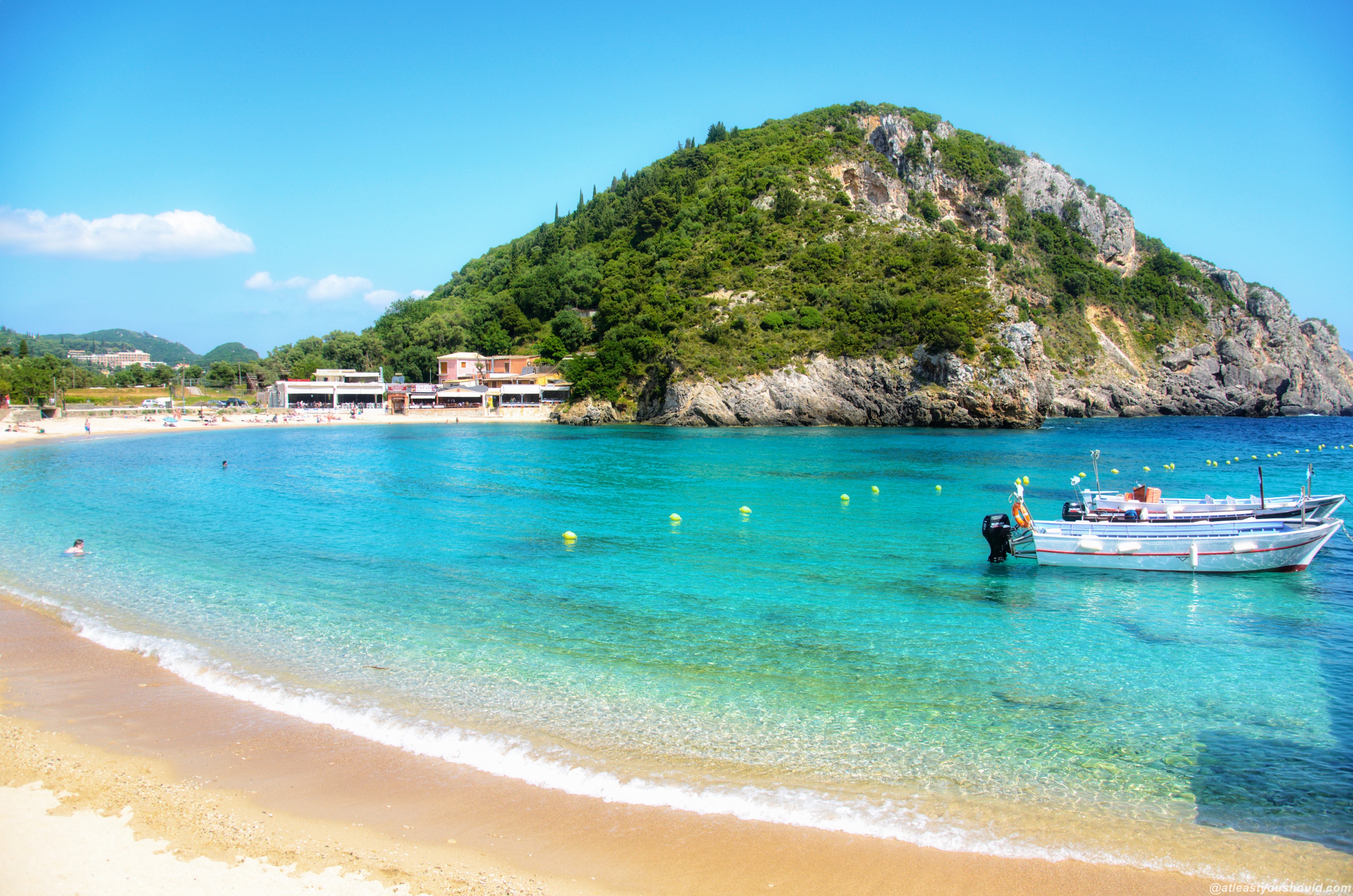 This was by far the most beautiful beach we found on all of Corfu, with fine sand and a protected bay. Swimming is great here. They offer tourist boat tours to some caves nearby, but we didn’t try.

Instead we went up to the monastery after relaxing on the beach. It goes steady uphill, but the walk is totally fine. And it is worth it. The monastery is beautiful. Entry is free but they ask for a donation (or for taking your picture, which you can buy later, but it is not aggressive). The Monastery is beautifully maintained and almost 800 years old. There is a little museum inside, but just strolling through the gardens is nice. 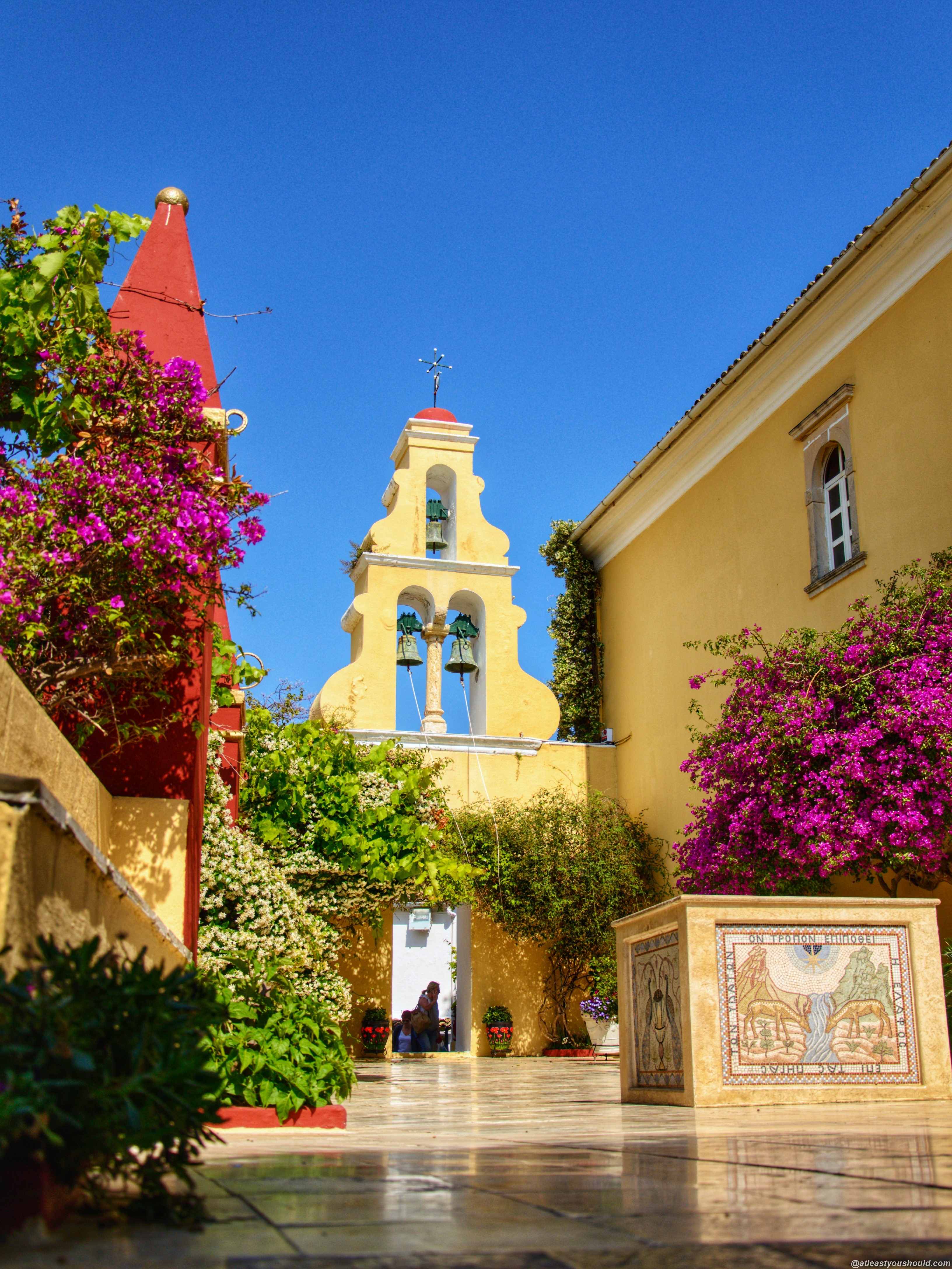 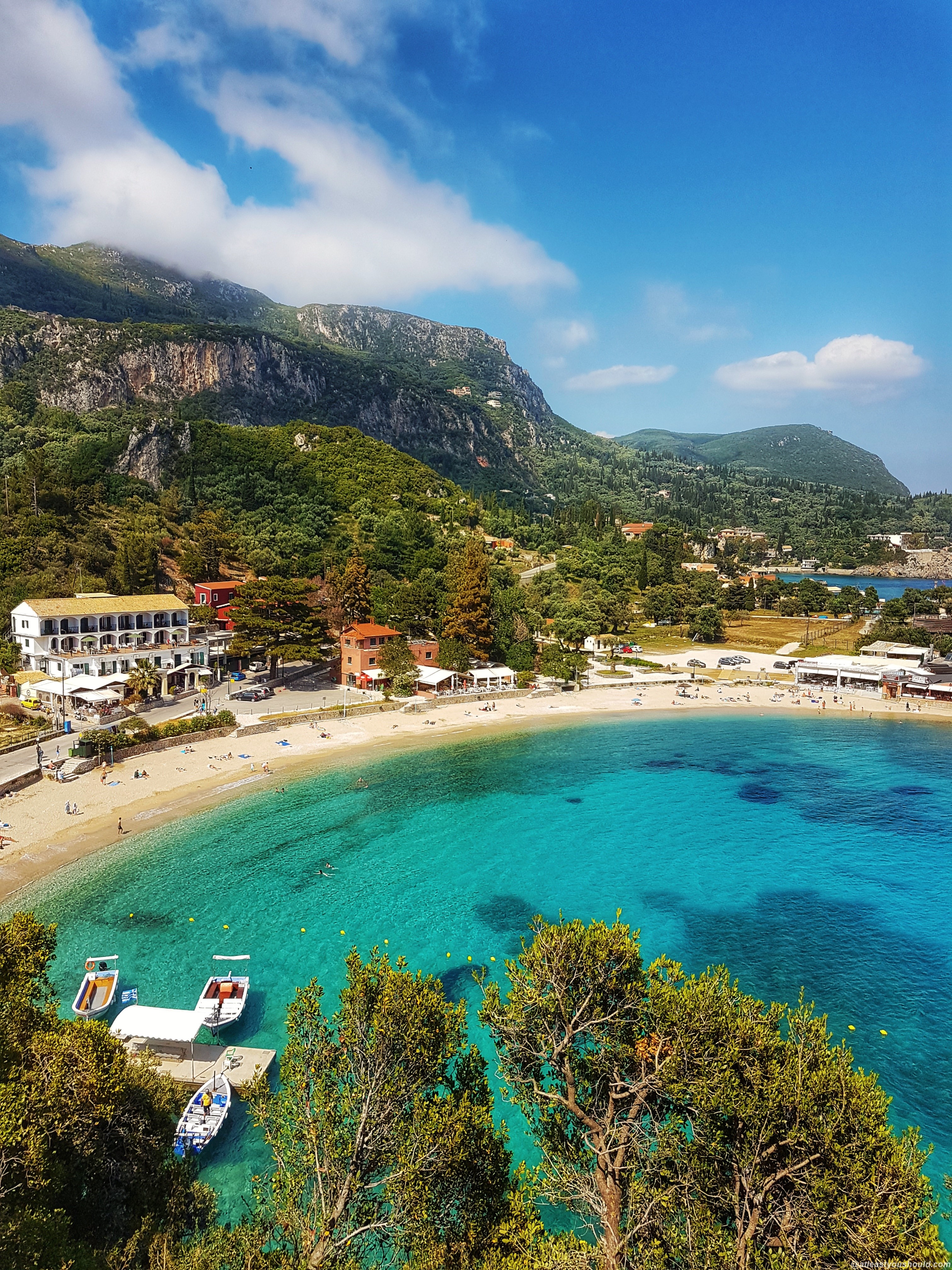 After coming back down, we took the car back to the apartment. There was a quite popular local restaurant nearby our apartment. We actually had not known it was that popular, we just had seen so many people in the first night and it looked really great. So we tried. The restaurant is called Squirrel and it is an absolute must visit. The owners (a family) are super nice and the food is really local. Not the stuff you get served in the greek places abroad. We also got free desert and several options to try local drink specialties. Prices were reasonable and we ate far too much!

So to walk it off we headed down to the beach again. There is a little amusement park near the beach with some carrousels. It was closed because it was off-season. But this time we saw some old guys play cards in the admin office. So we went in and just had a chat with them. They turned on the power for us and we got to ride the bumper cars for as long as we wanted. This was so cool – the whole place quiet, dark, and shut down, just the bumper cars with the lights and noise. Going back we took a different path up the hills. The area is not so densely populated, so we passed through a little forest. Stepping over a little slope we ended up at a small clearing and there were literally thousands of fireflies! They are common on Corfu, but I have never seen so many. It was like an ocean of little white lights.

Amazing dinner, walk on the beach for sunset, riding the bumper cars in the abandoned amusement park in the dark, and then the fireflies… These are memories you will never forget.

Sunday, our last day. After breakfast and checking out, we headed straight for another popular destination just south of Corfu city: The Achilleion. 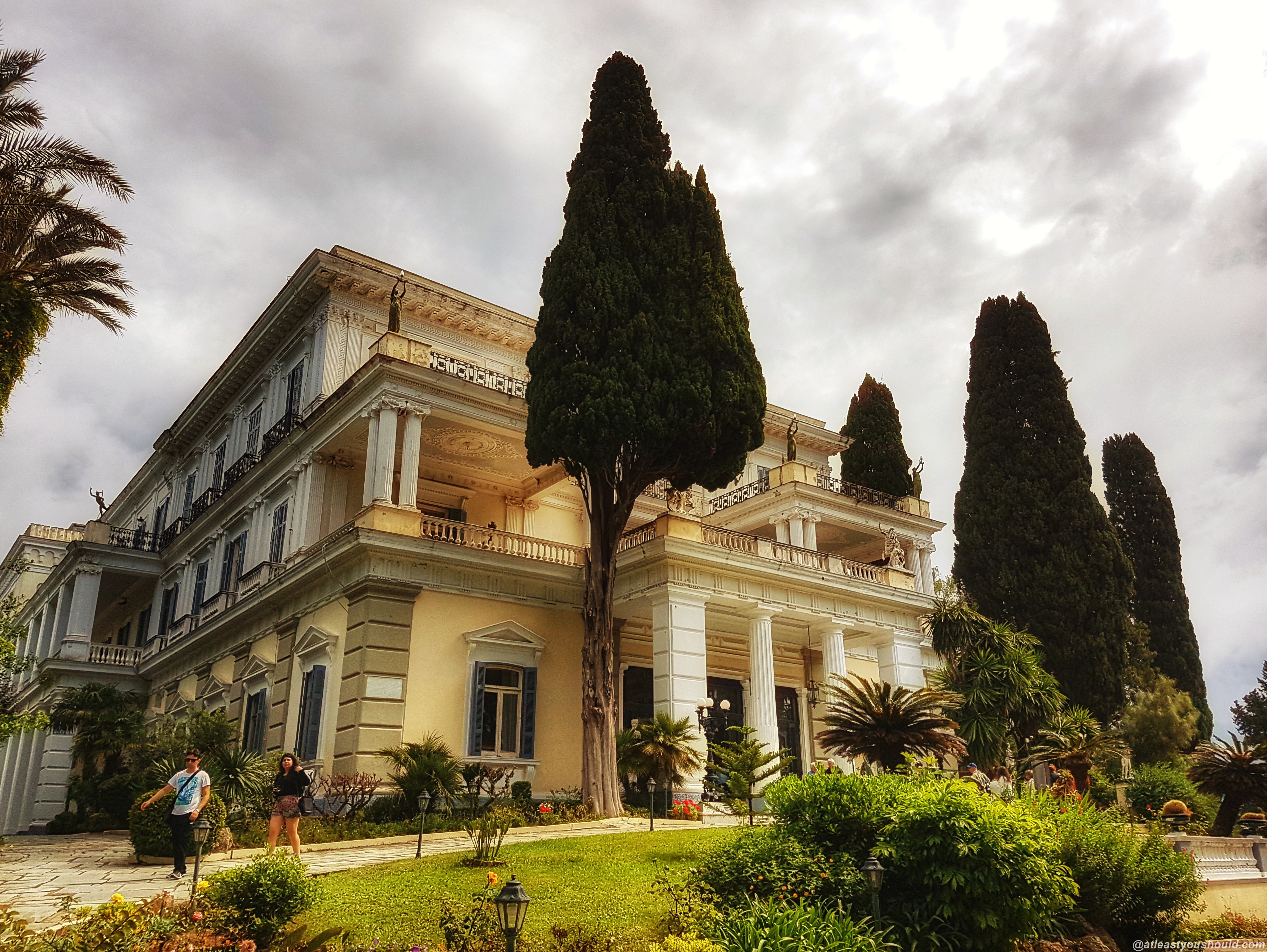 This palace was built by Kaiserin Elisabeth of Austria (Sisi) to honor the great, but tragic greek hero Achilles. The palace was later acquired by Kaiser Wilhelm II and it is fascinating to see the two perspectives of these very different rulers on this hero of the Illiad. Elizabeth, a world traveler and explorer, but lonely, saw the tragic hero and built a statue of the dying Achilles pulling Paris’ arrow from his heel. Wilhelm – egocentric, insecure and superficial, worshipped the warrior hero and built a martial war monument for him. 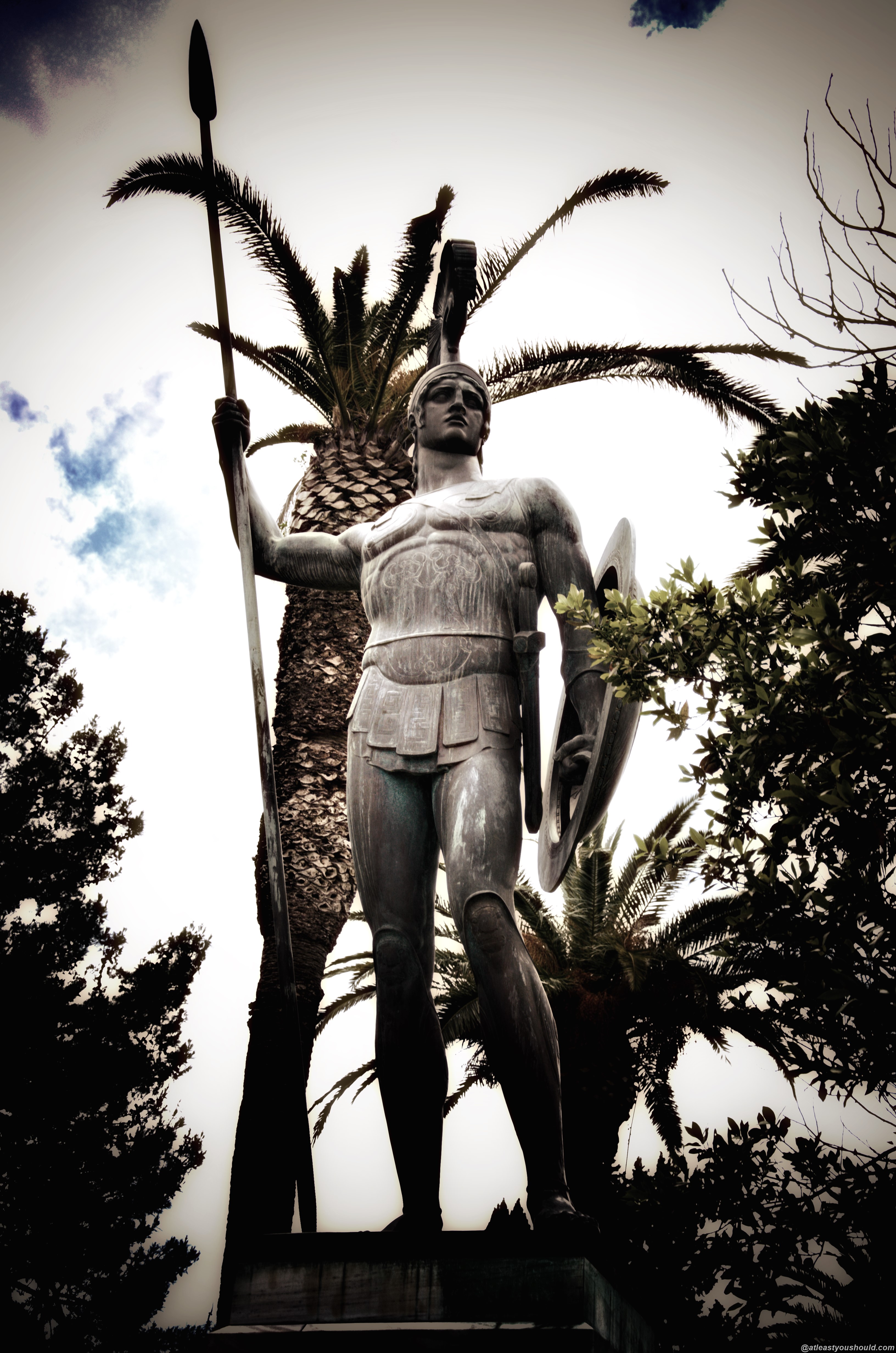 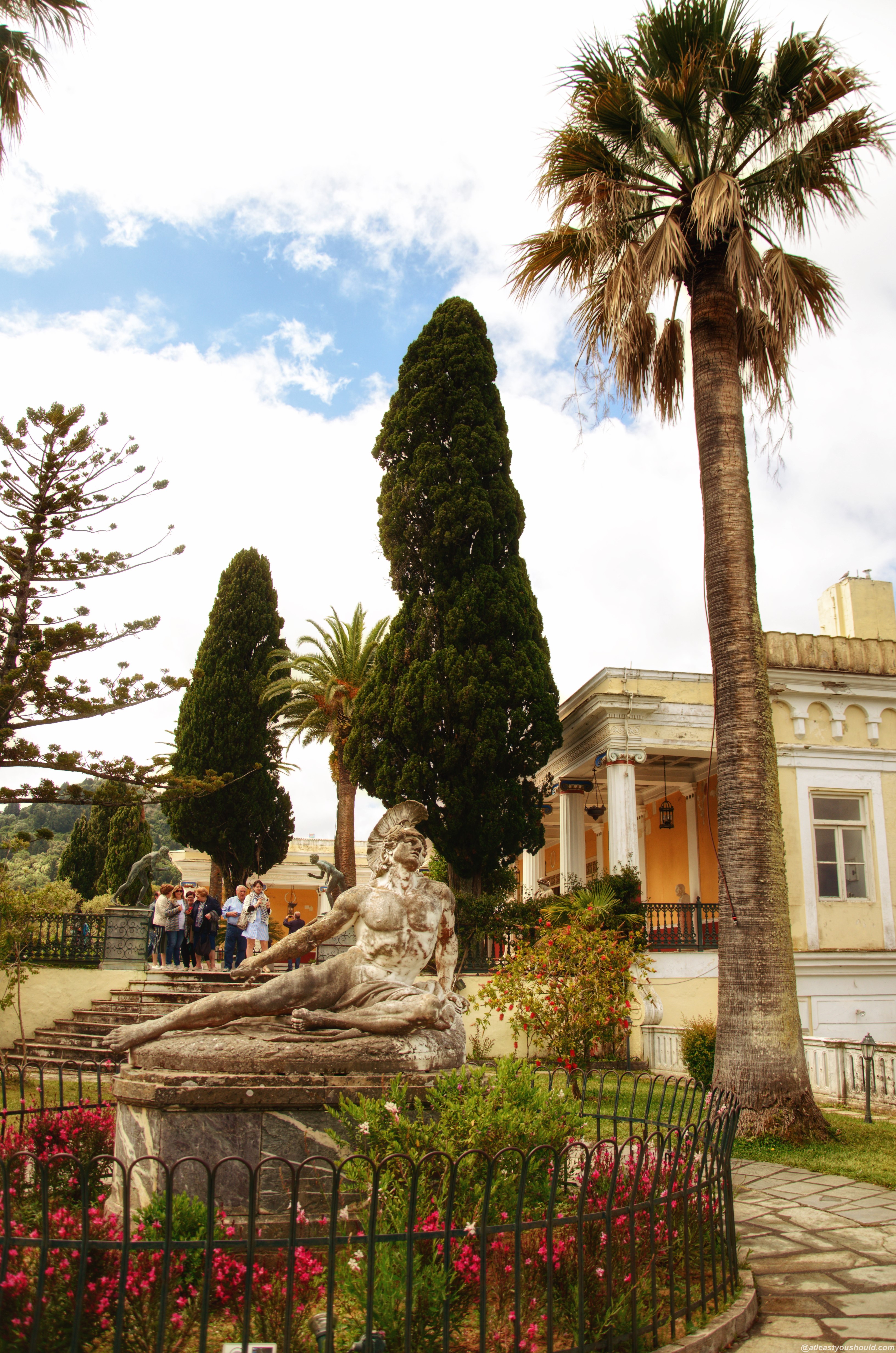 I love the Illiad and the figure of Achilles in particular. I like to think he was both. A warrior-god who despised fighting. And a proud and sometimes naive man, but honest and kind. And he chose the short, full life over the safe but dull eternity. I can really recommend the Achilleion. The building is beautiful and the history behind it – both ancient and more recent – is impressive. 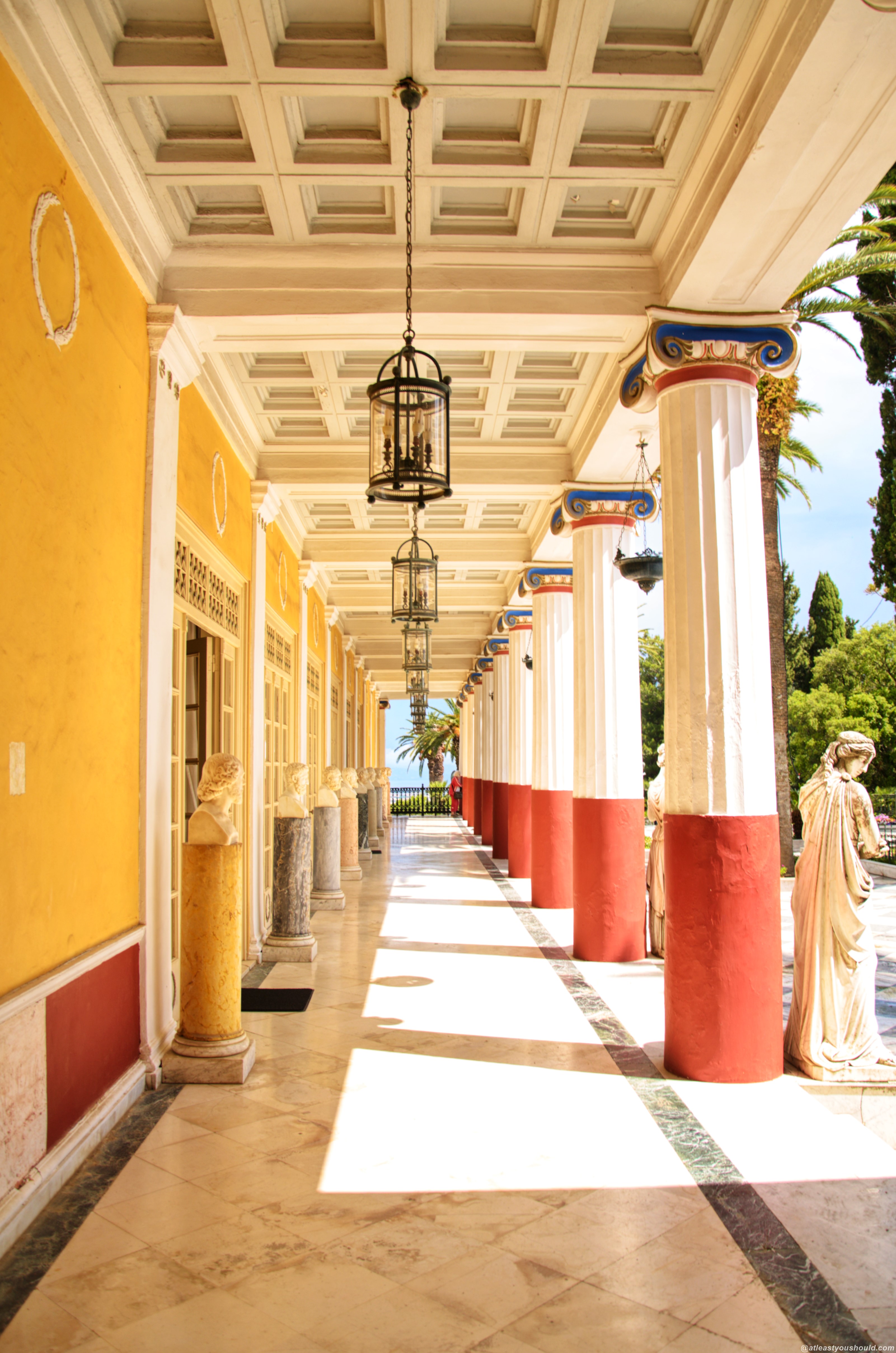 After our visit here was completed we headed for lunch into old town. That day (21.05.) was the national day of the merger of Ionian Islands with Greece. So half of the city was blocked off for celebrations and we got to see a really cool air show.

After that was over and the crowds cleared from the city early afternoon, we also returned the car and boarded our flight back home.