Early April we met up with friends in Riga, for a short weekend-escape.

Riga is the capital of Latvia, the largest city in the Baltics and a bustling capital that combines a young population, who embraces new technology and progress, with the fascination of the largest number of art nouveau buildings in the world and many remnants of medieval history.

Flight connections were not so great, so we had to take a Thursday flight and came back already on Saturday. Fortunately, we went over Easter, so no vacation day required. 😉 The flight departs late so you can easily reach it after work.

We met our friends directly at the airport in Riga and headed together to our hotel. We have done this a couple of times with them – meeting up in great places around the world (Maldives, Lisbon, Nice, and now Riga), but even though we all live here, we actually never met in Germany.

April is not the ideal time, it is still quite cold in Riga. Up the upside we did not have so many other tourists running around. And the main focus was on meeting our friends and having a good time. Does not matter much if it is 5° or 15°.

After an early breakfast, we started our Good Friday excursion by passing the Espalanade and Cathedral and exploring the Art Nouveau district of Riga. You can find the most beautiful buildings in the area around Elizabetes Iela and Alberta Iela. It was a beautiful day, starting cloudy but clearing up throughout the day. Just very cold. 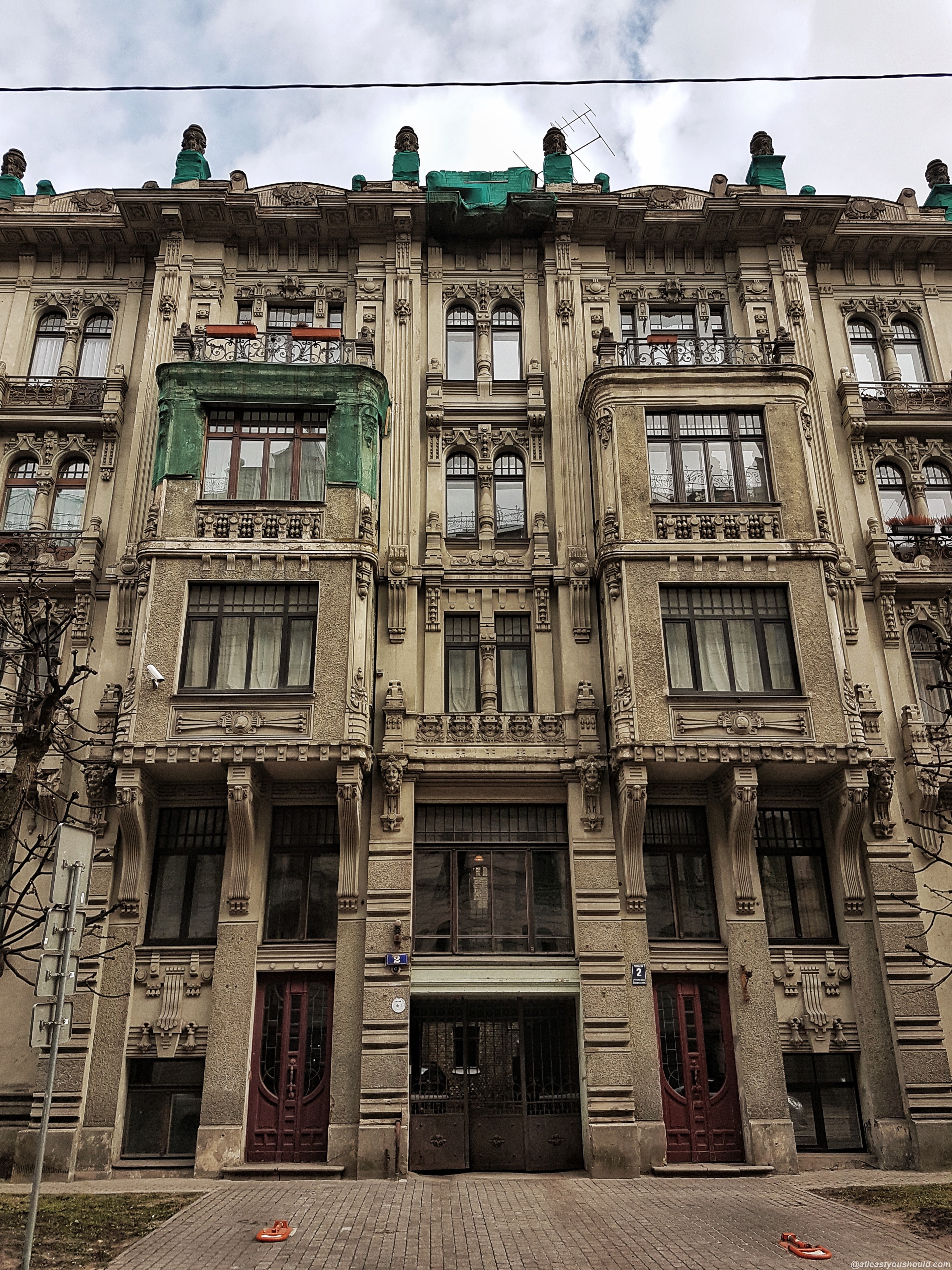 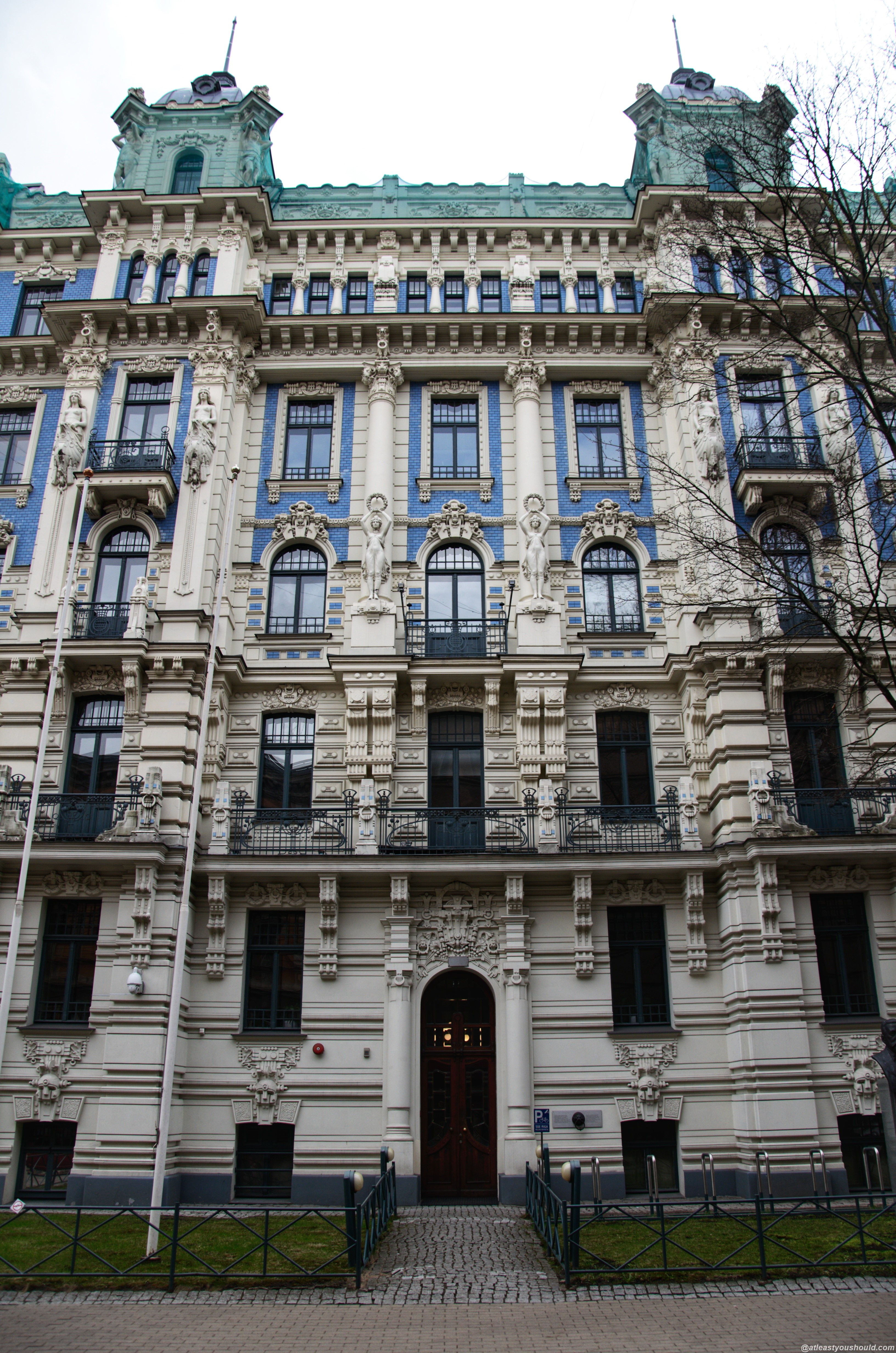 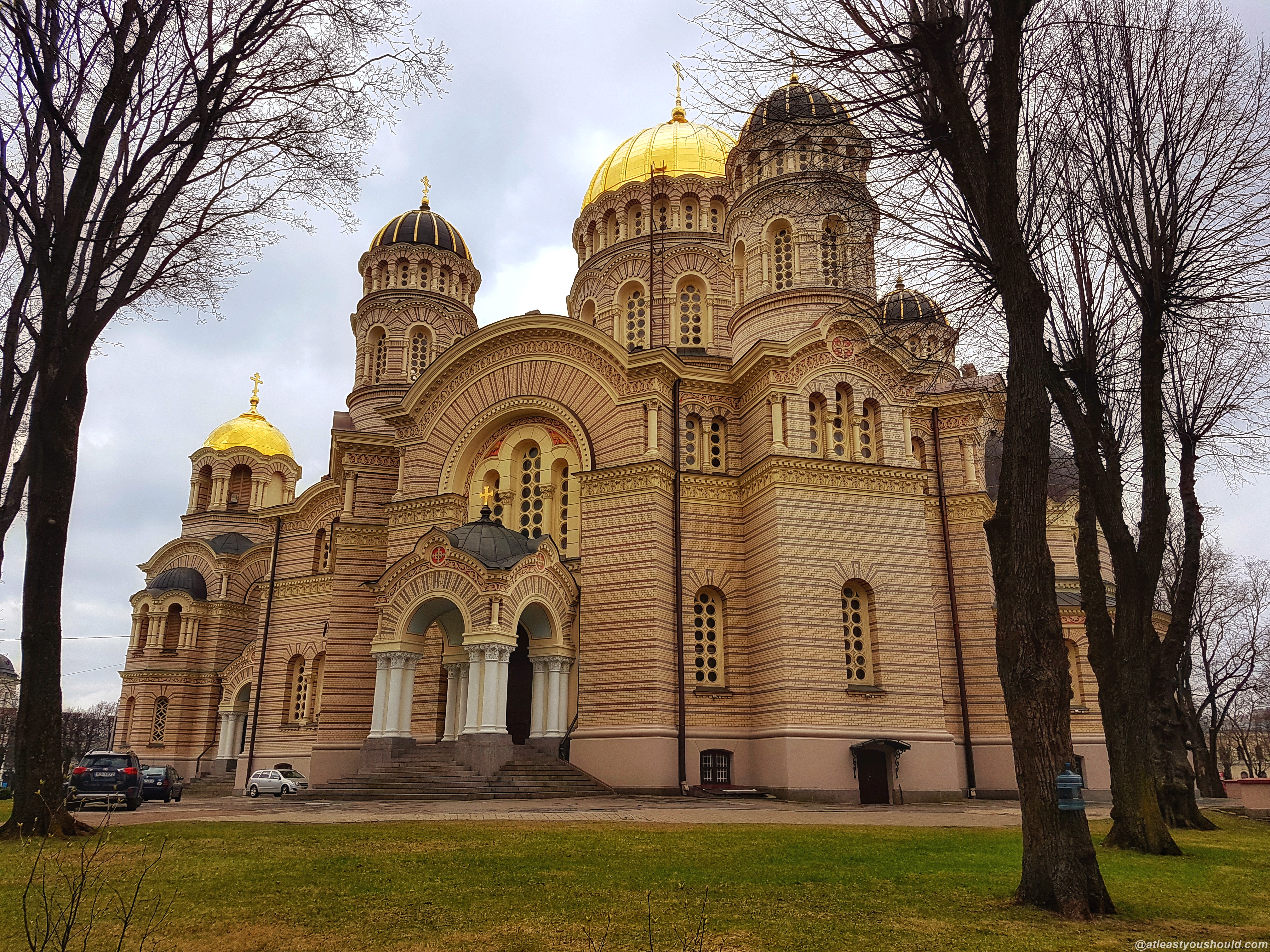 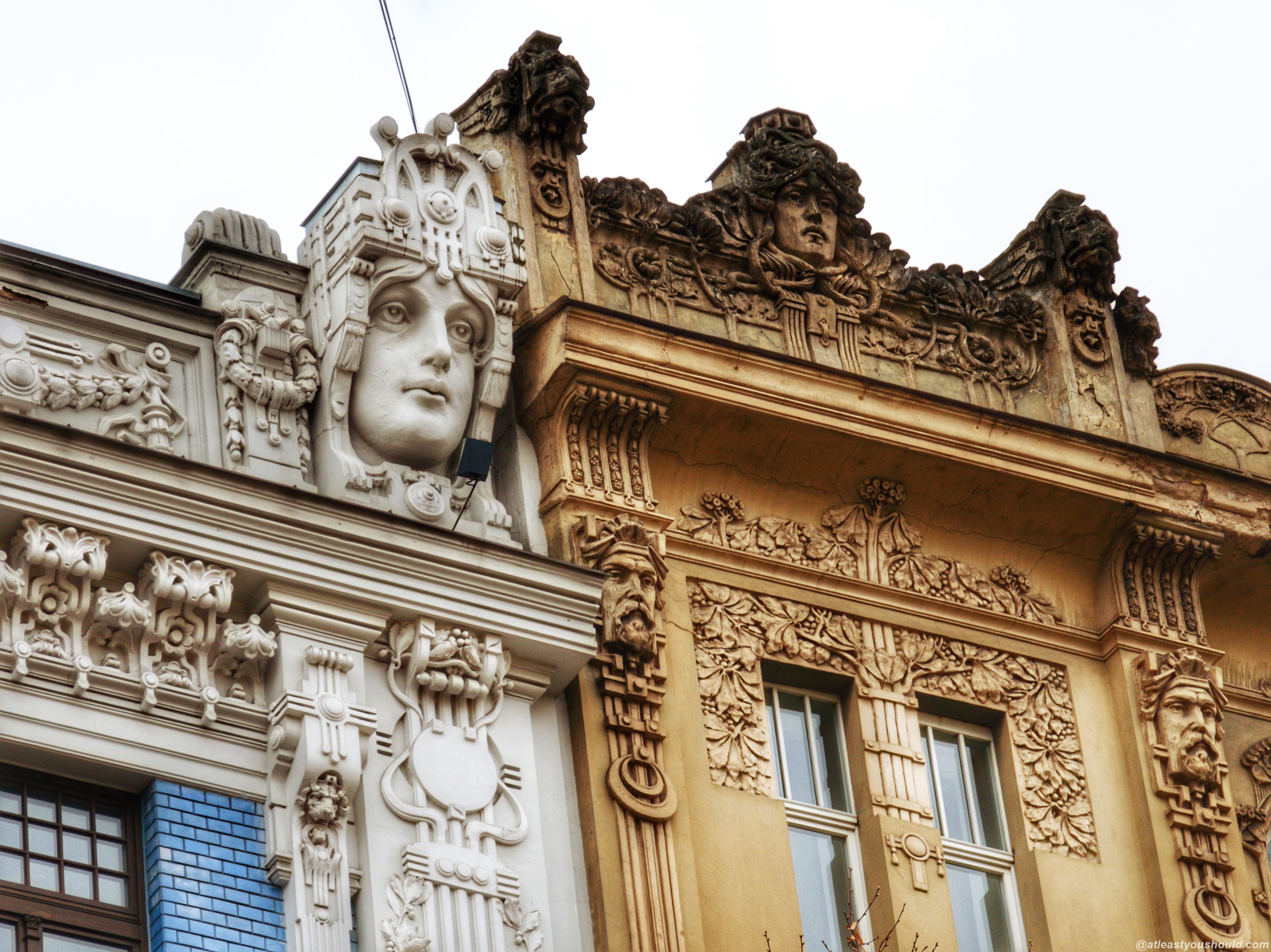 We continued towards Kronvalda park – don’t miss the Pushkin Monument and made for the city center and old town. You can easily do all this by walking, the distances are really not that far. The old medieval streets of Riga are just as beautiful as the Art Nouveau district. 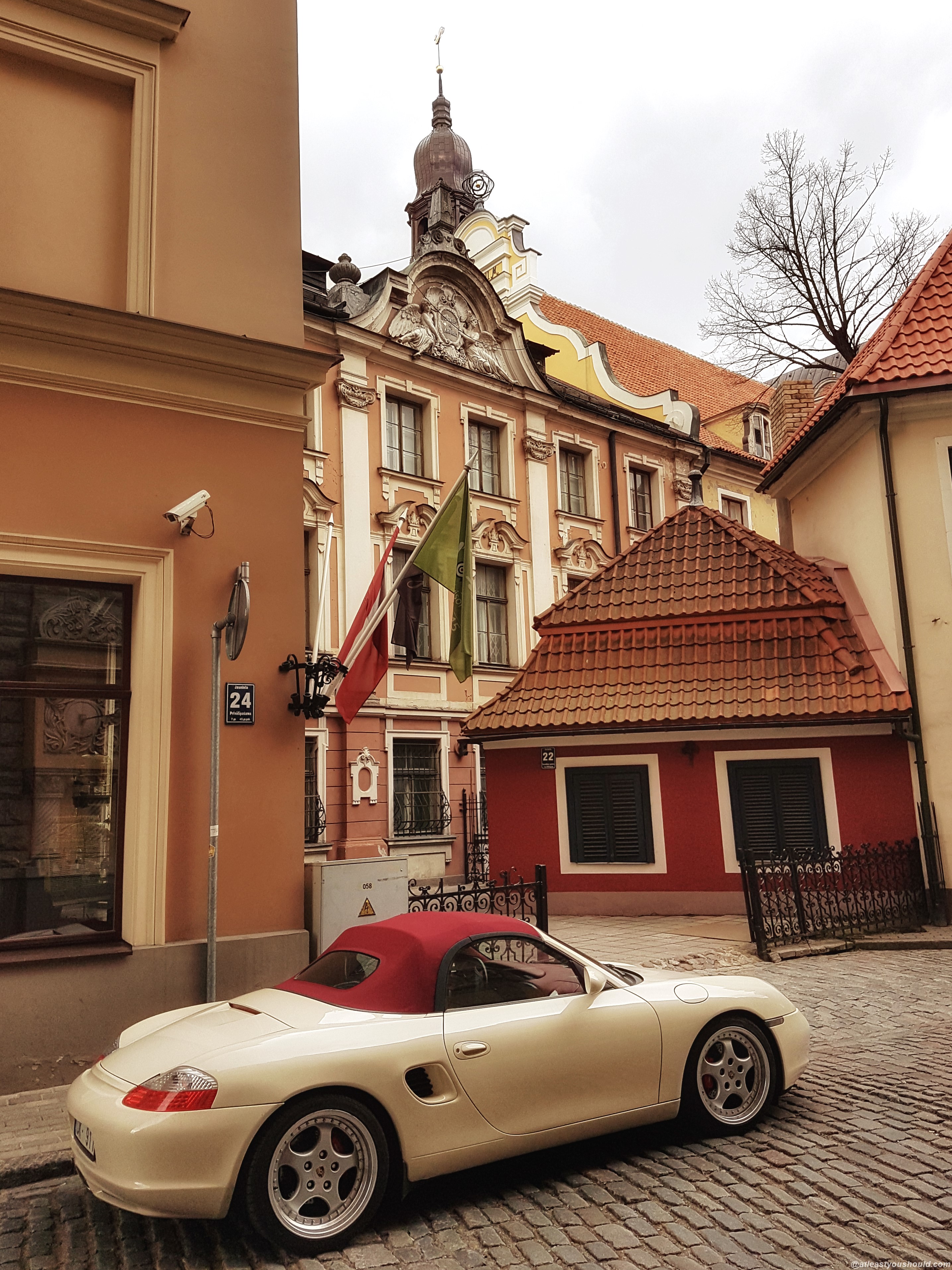 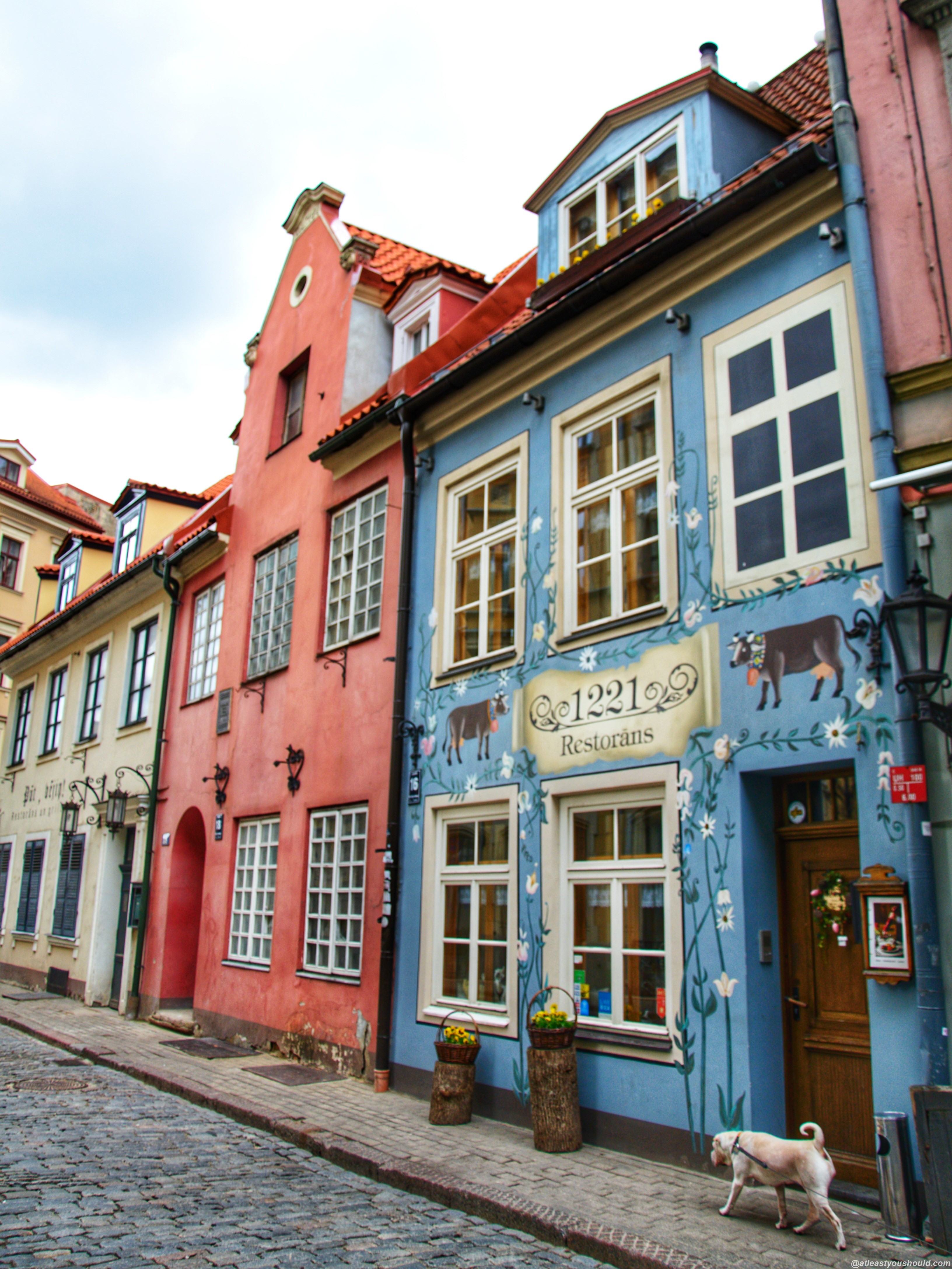 Our first coffee stop was at Fat Cat Café. There are literally hundreds of good cafés in Riga, but I will highlight a few that we liked in particular. From here it was a just a few meters to the House of the Blackheads. This home to the brotherhood of the blackheads dates back to 1334, and was a center for trade and merchants for almost 700 years. 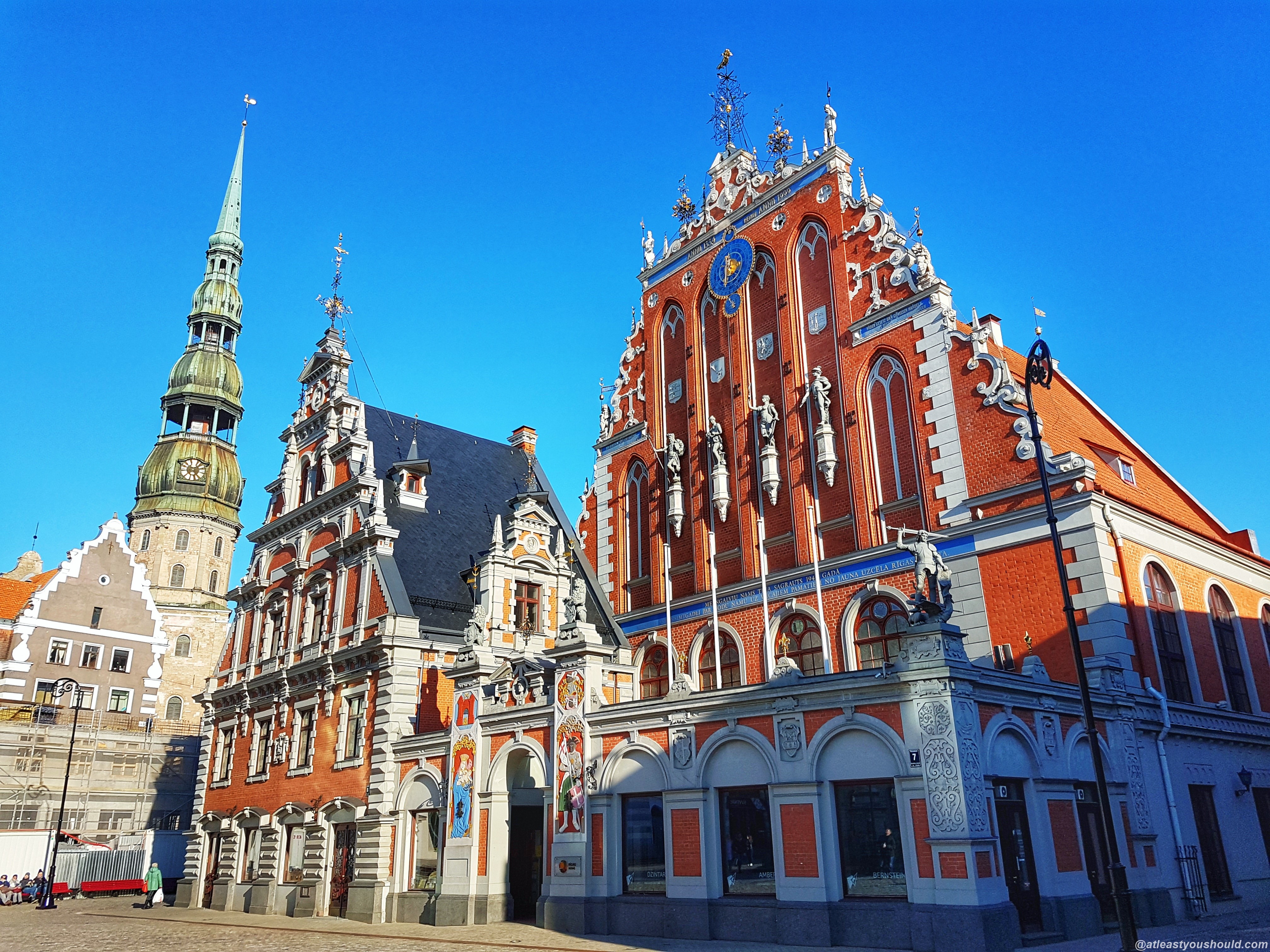 Our next destination was St. Peter’s Church. You can ride an elevator to the top and have an amazing view of the entire city. 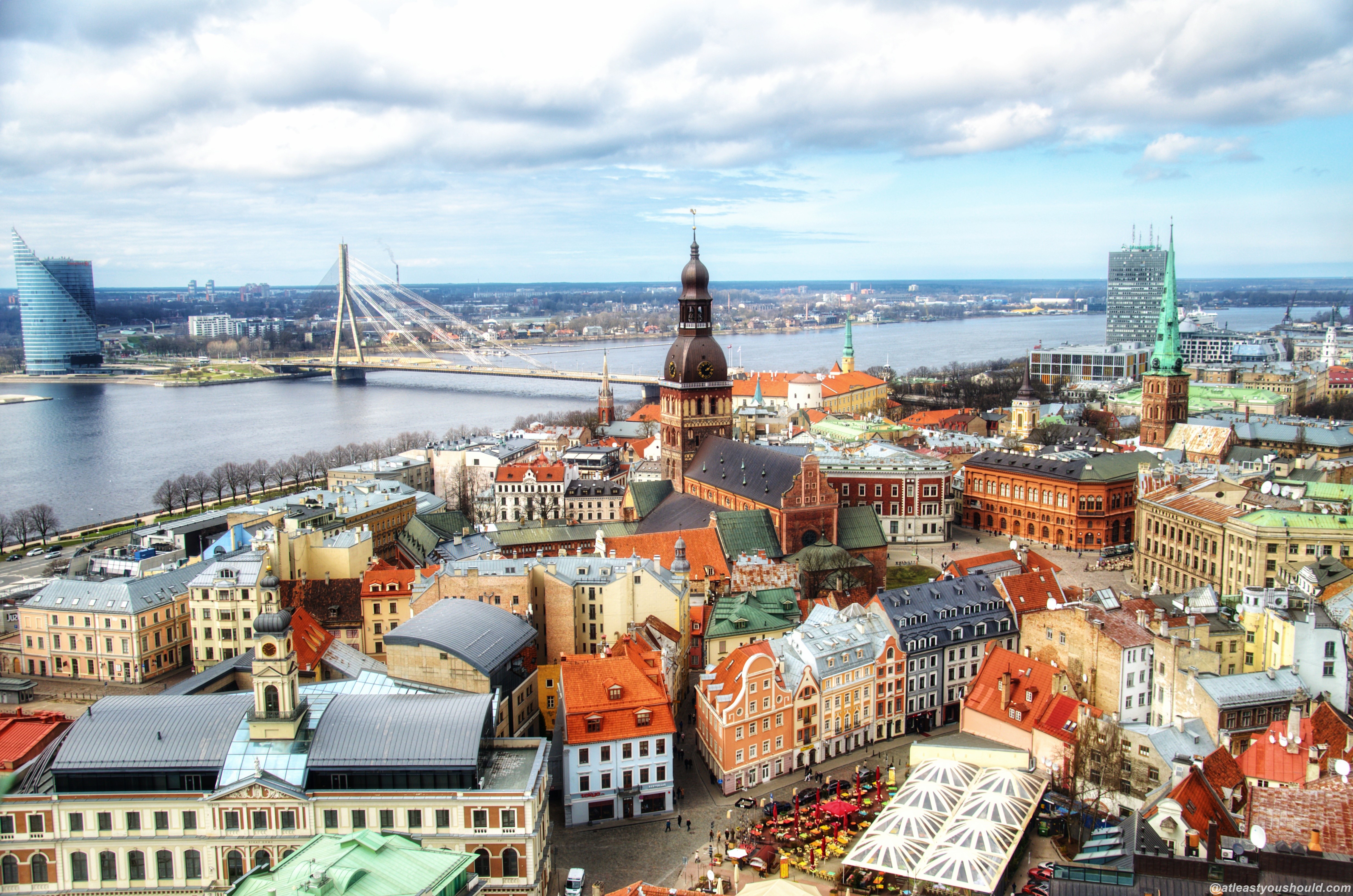 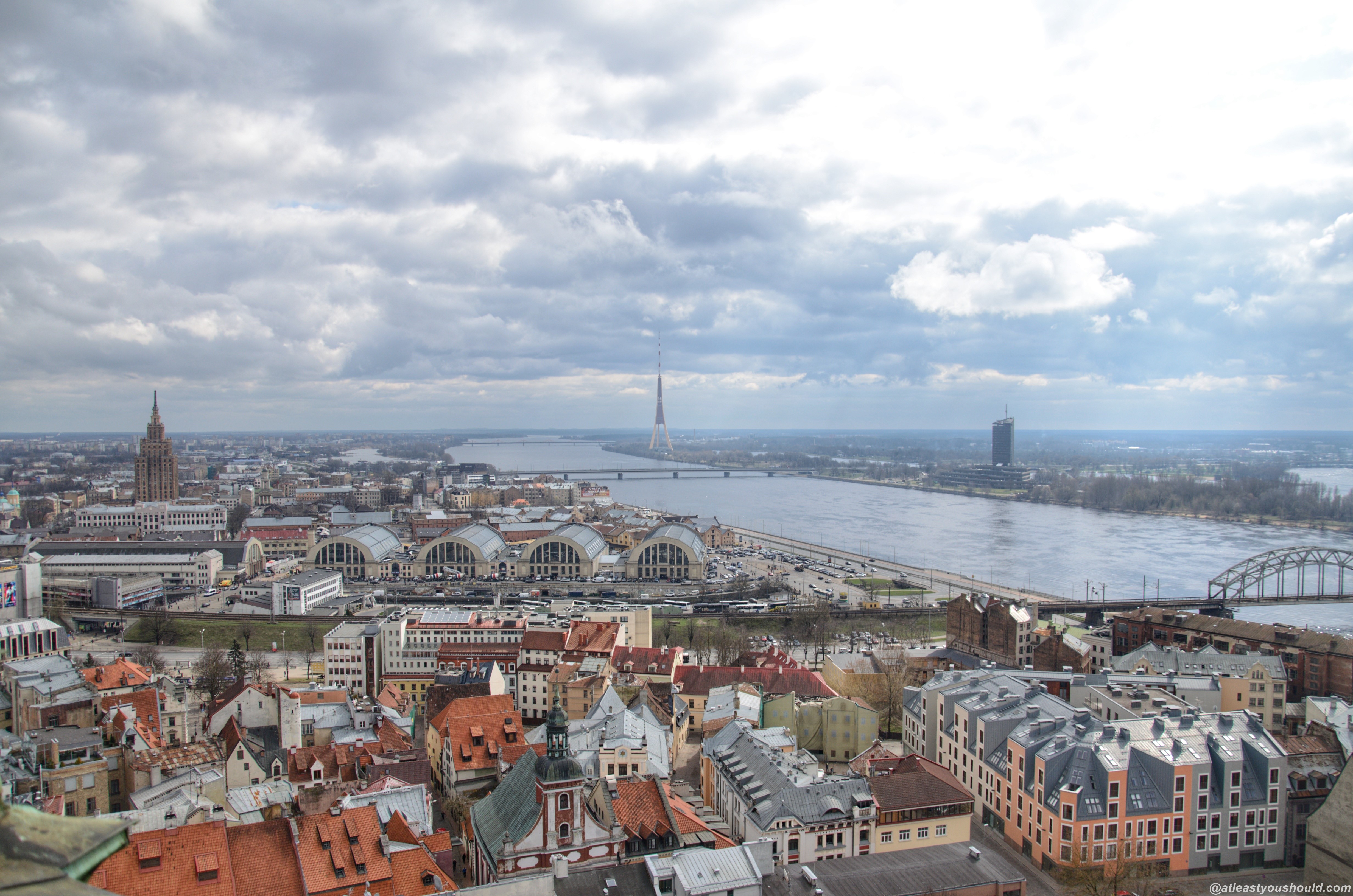 Leaving St. Peters Church- we stumbled across these fellows: The Town Musicians of Bremen. It is both an homage to another great trade city as well as a symbol of tearing down the iron curtain (the musicians are shown breaking through a wall). 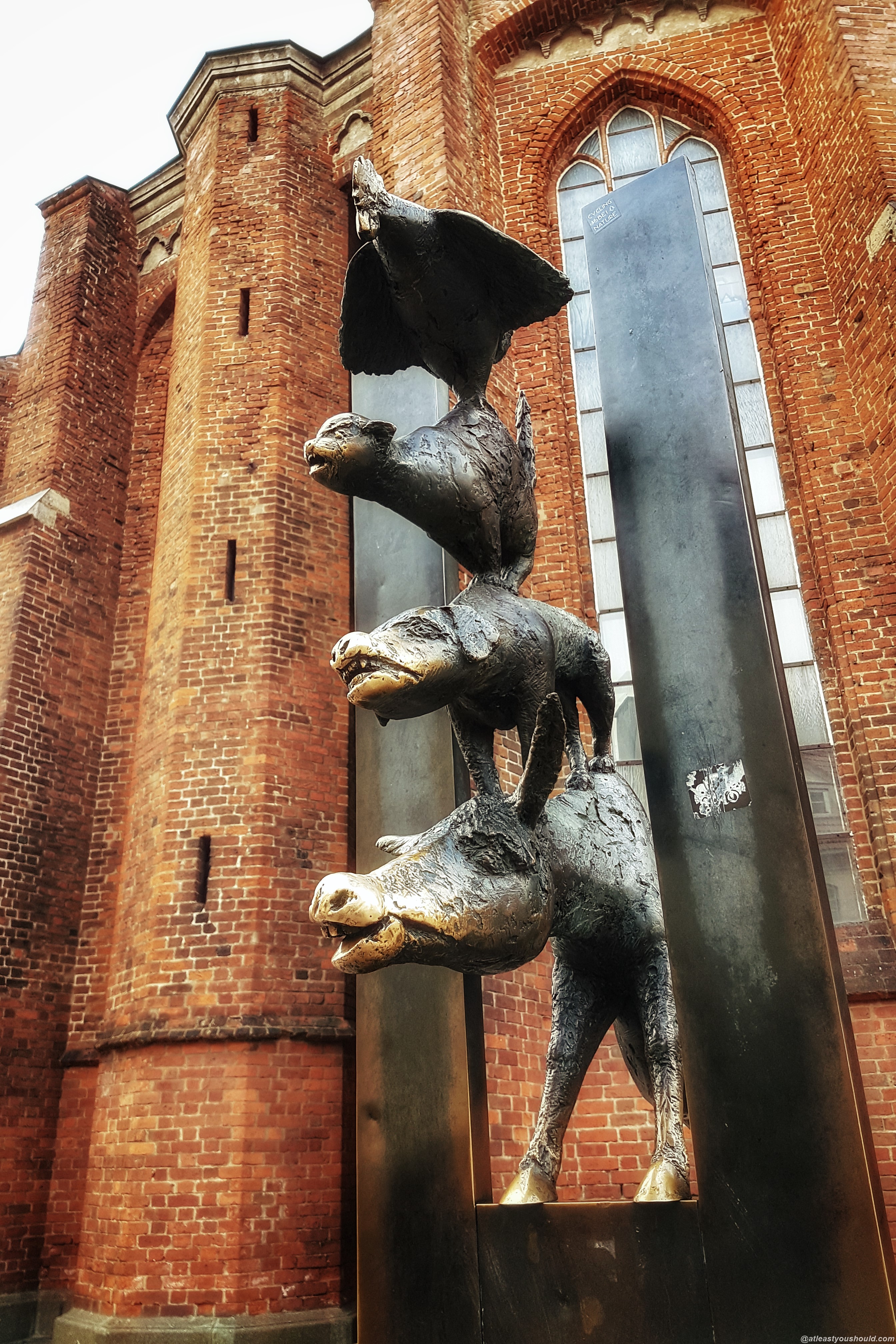 After this, the cold air chased us into yet another café: Kuuka Kafe. Did I mention all cafés in Riga were just amazing? 😉

With recharged batteries we headed towards Daugava River and stopped at Riga Castle. The walk by the riverside is nice. We did not try to go into the castle.

Instead we headed across the bridge into the western side of Riga. 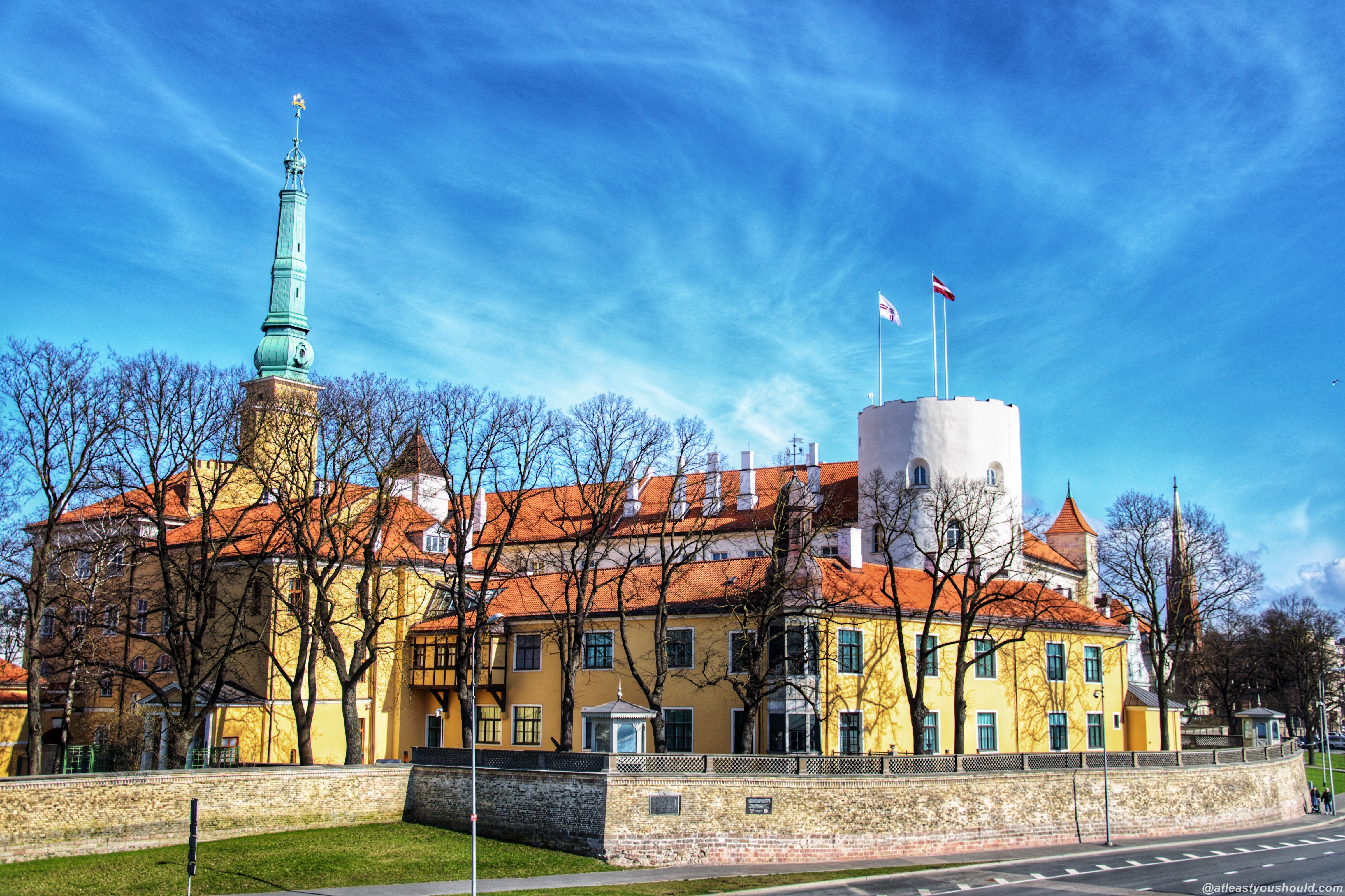 We did not have that much time, but I still recommend getting the other riverside. There isn’t much that all the guidebooks recommend, but we found Victory Park quite enjoyable and quiet and there are lots of impressive buildings, old and new. And of course the just recently completed (2014 I think) Latviva National Libary. Obviously closed on Good Friday, but an impressive piece of architecture: 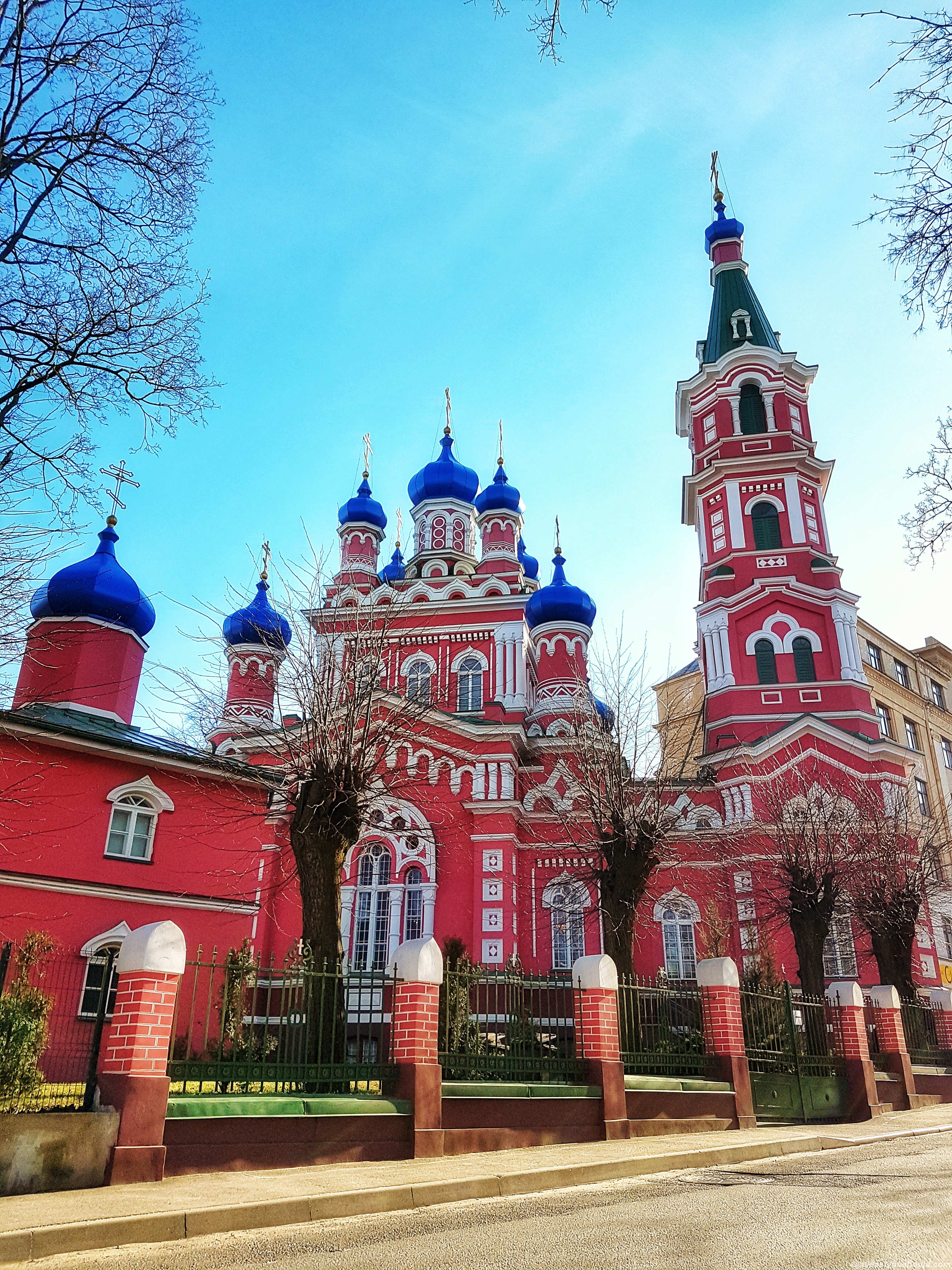 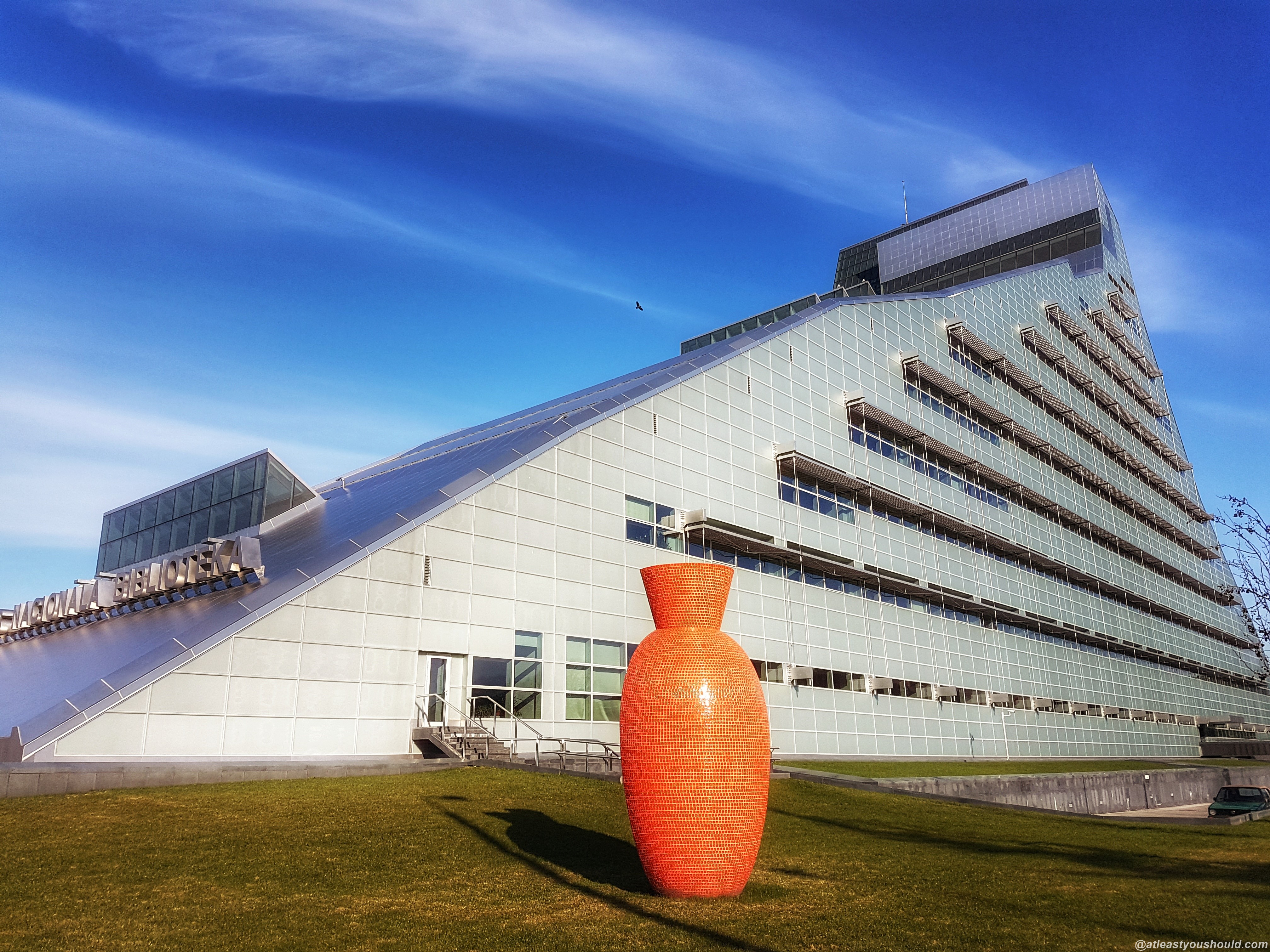 Back across the other bridge and off to the Radission Blu near Esplanāde. The Sky Bar offers one of the best views of the city, plus good music and great cocktails. Getting a night shot through the glas windows is tough, so just enjoy the view. 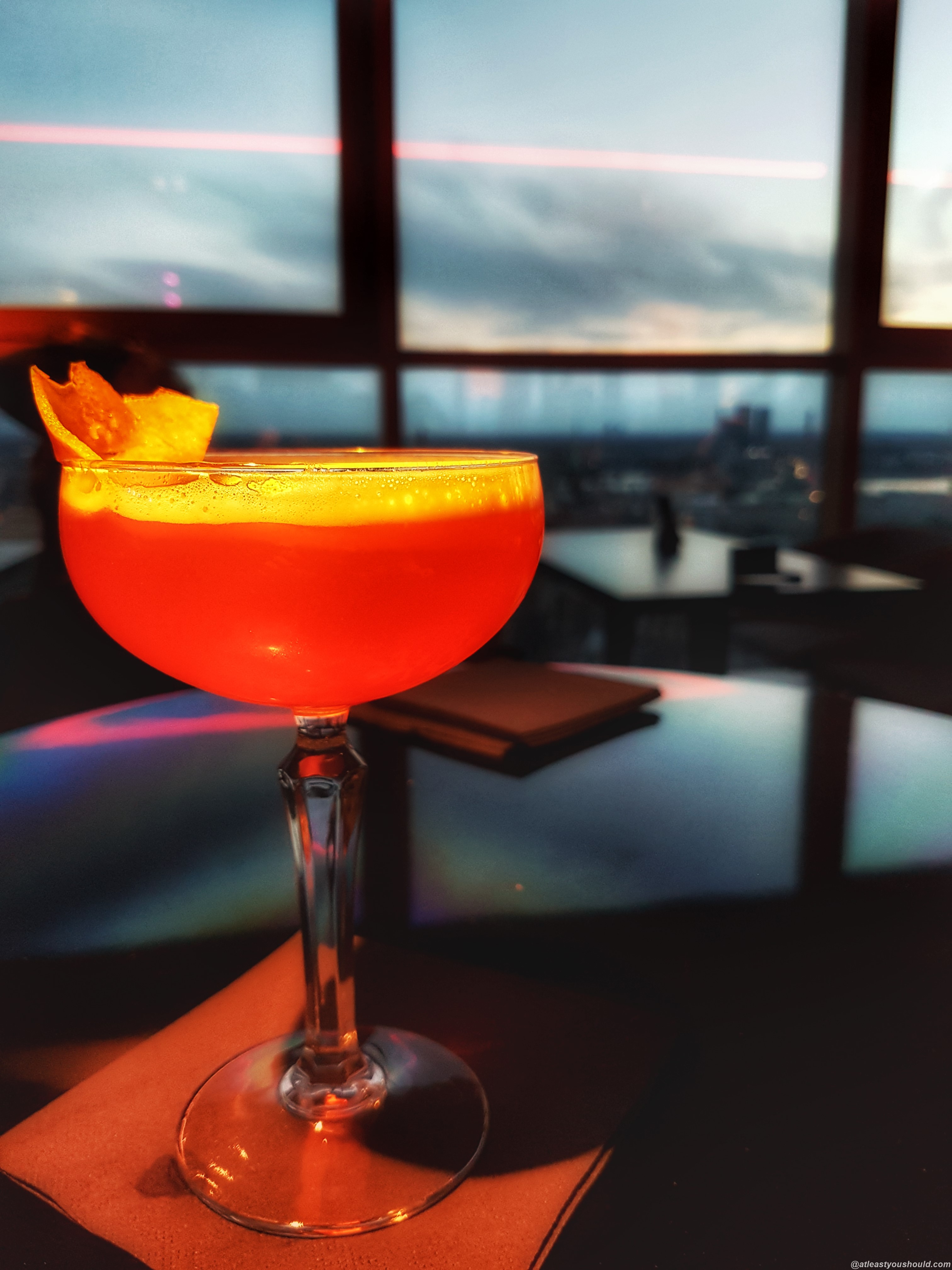 The next morning, we headed to another *must visit* recommendation of all guidebooks. The Central Market. Actually, most of the time I end up hating those places (see our Santiago trip for example) because this is just tourist rip-off location. But the central market was full of locals and featured some great and interesting food. I really liked it. 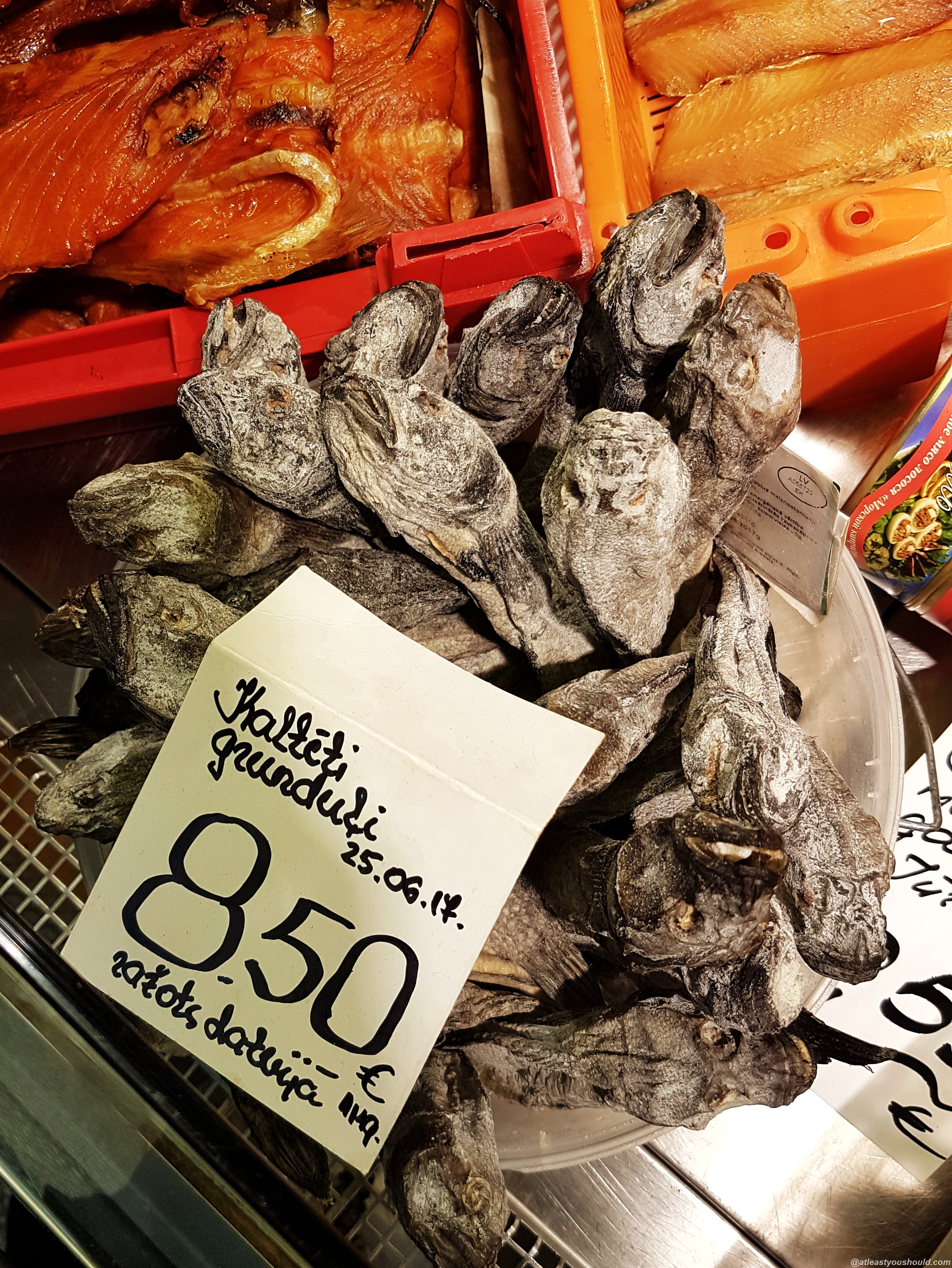 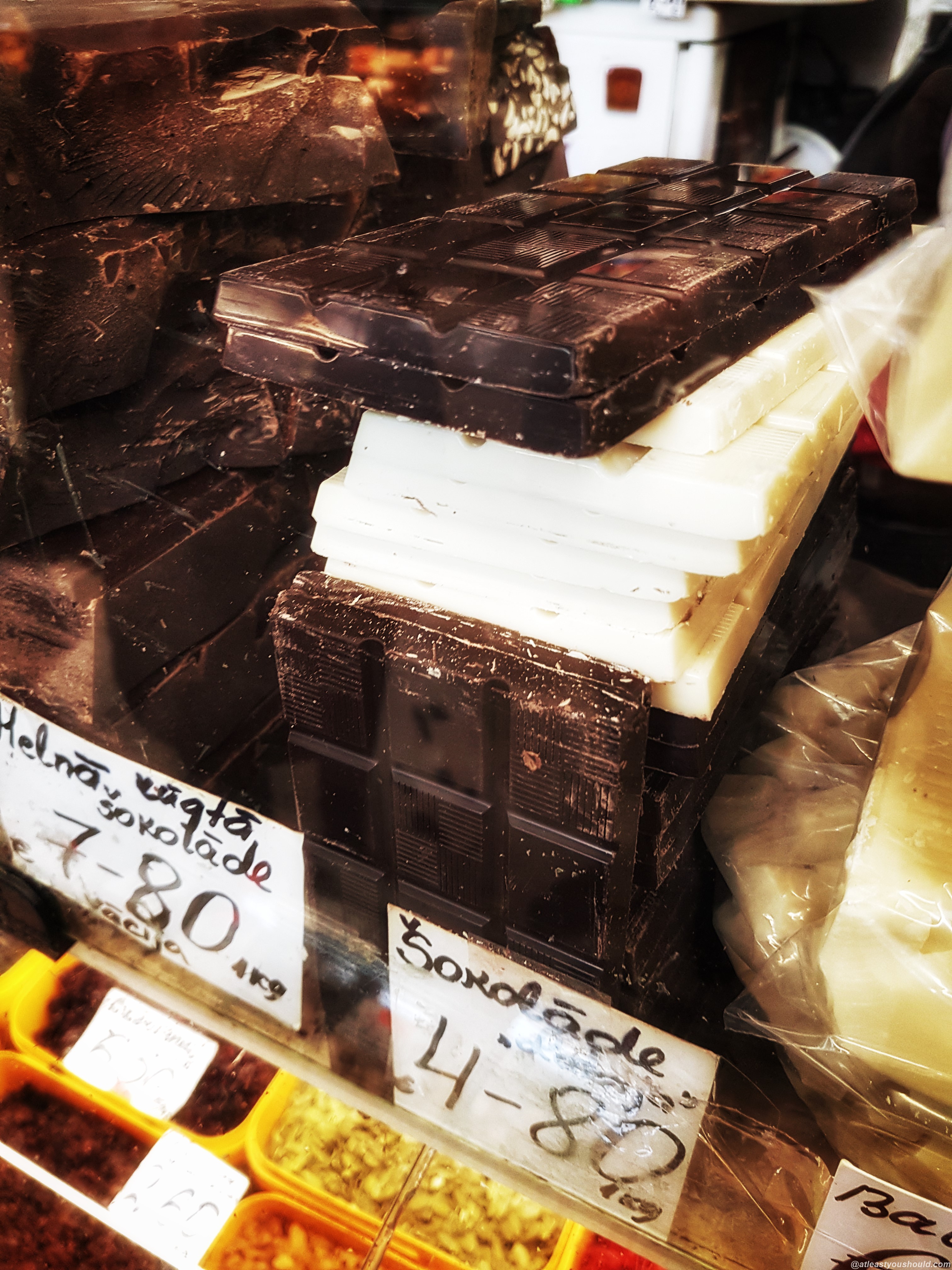 It was still early, so we did not go crazy with trying the fishheads… But you must buy the chocolate. The flavors are very unique and the prices (as you can see from the picture) are quite good. On the way back, make sure to head through the underpass. There is some great street art to find:

We made our way into the old town again and visited the three brothers on maza pils street. These three residences are actually the oldest (private living) houses in Riga, the oldest (and ugliest) dating back to the 15th century. 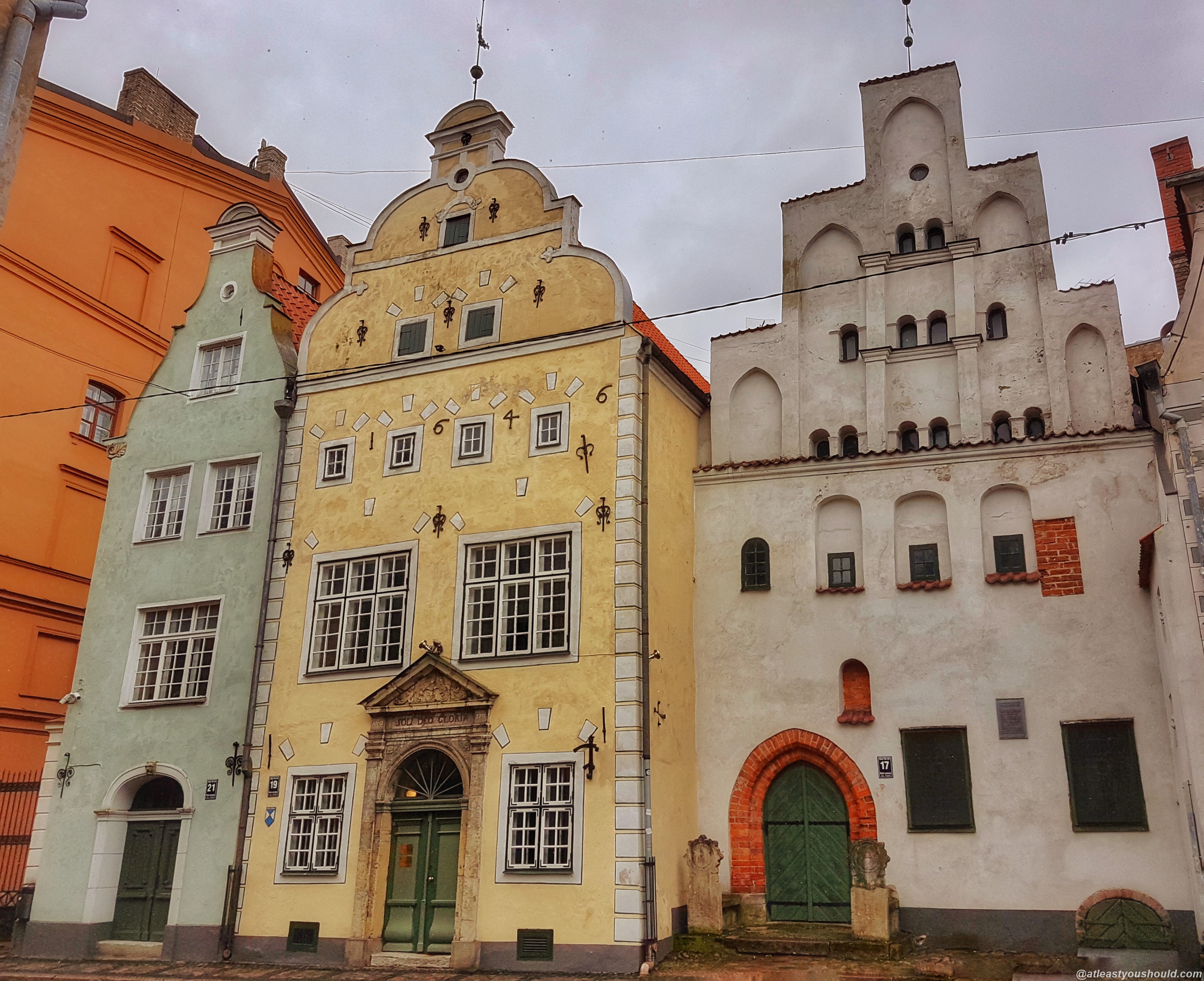 After saying goodbye to the brothers we made a tea break in my all time favorite of cafés: The Riga Black Magic. I know the name sounds really awful, but the places was amazing. It is built into an 18th century pharmacy and the sell Riga Black balsam. Yes of course it is commercial, but the design is impressive. Check for yourself: 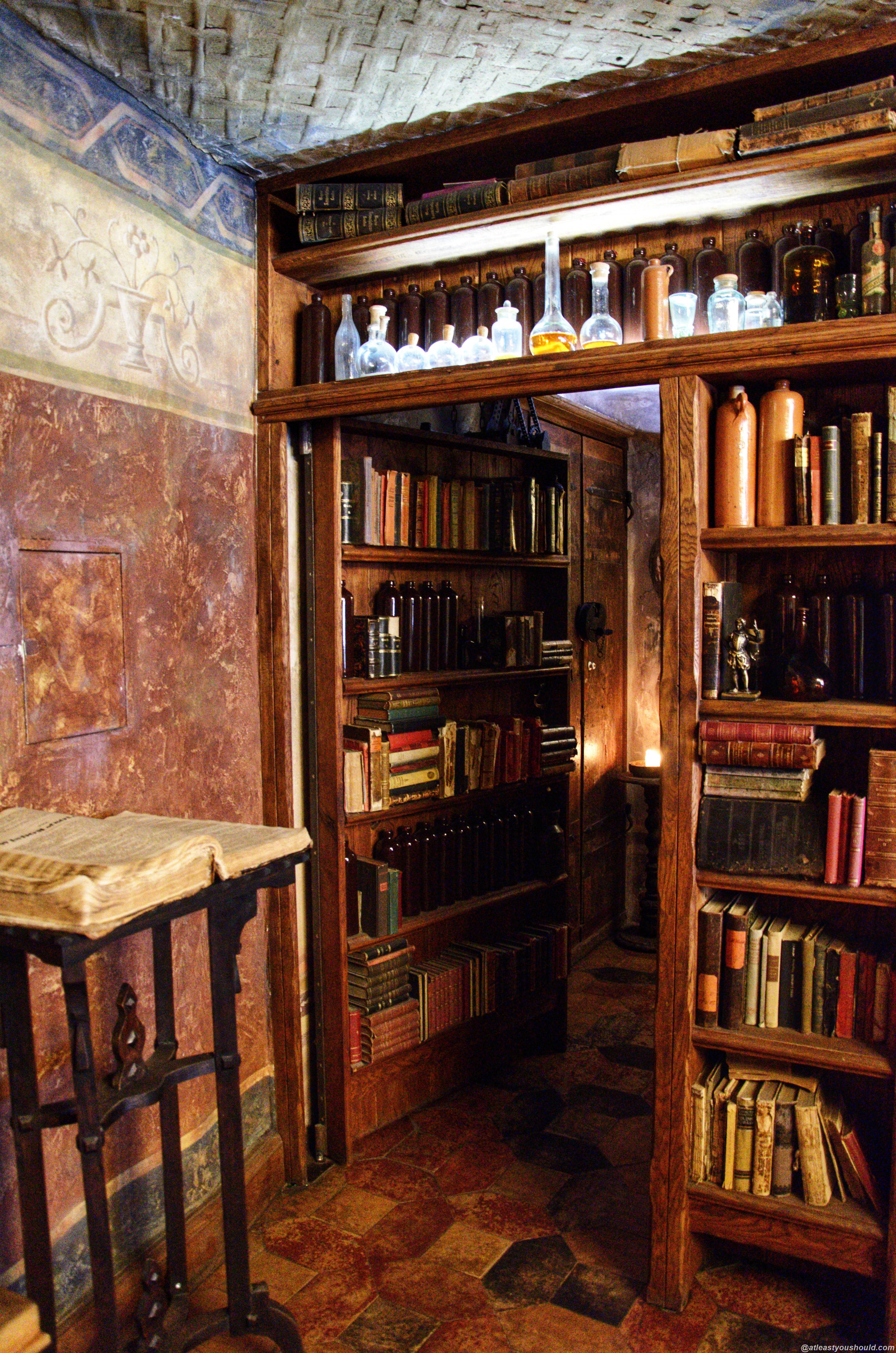 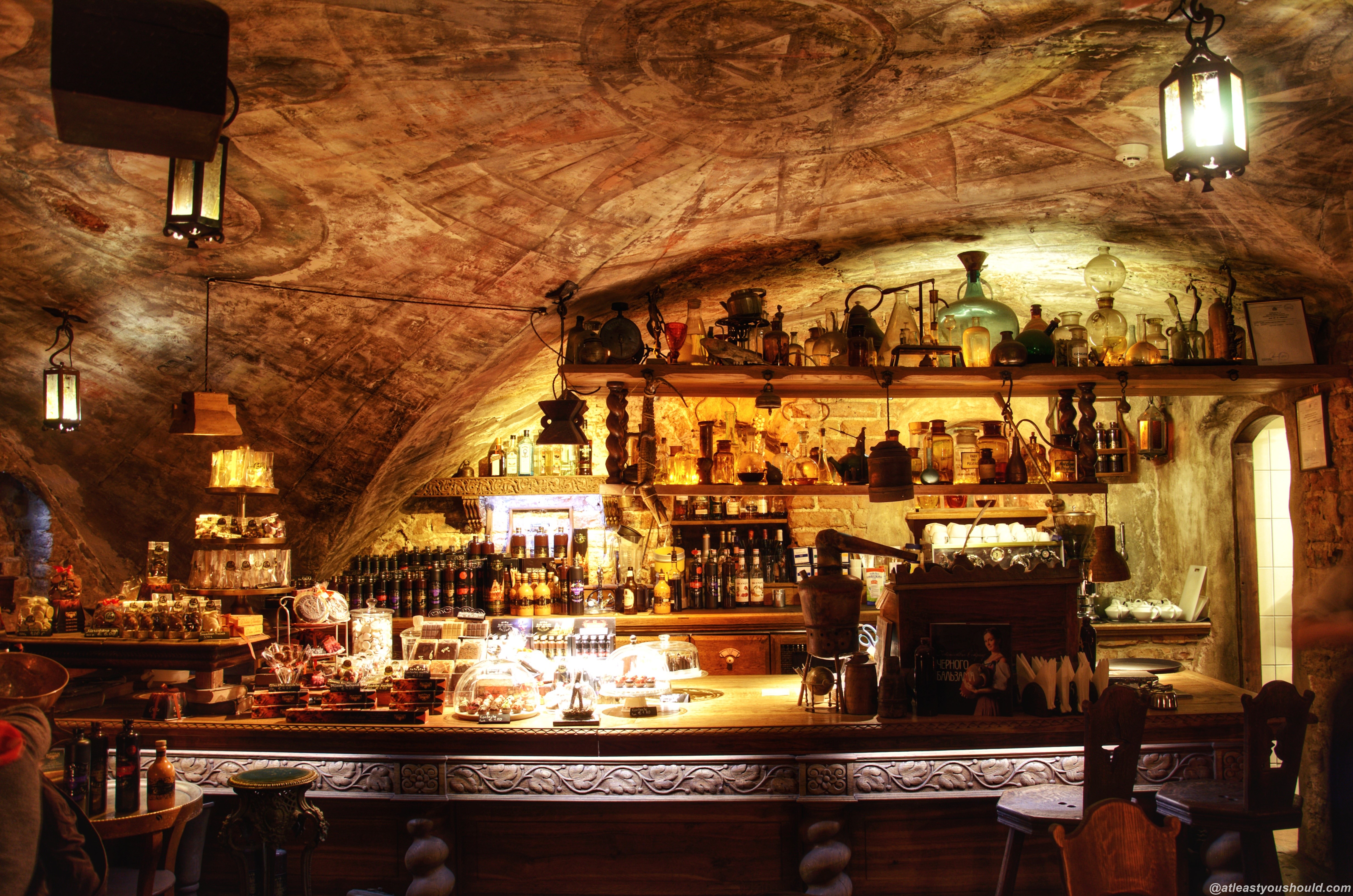 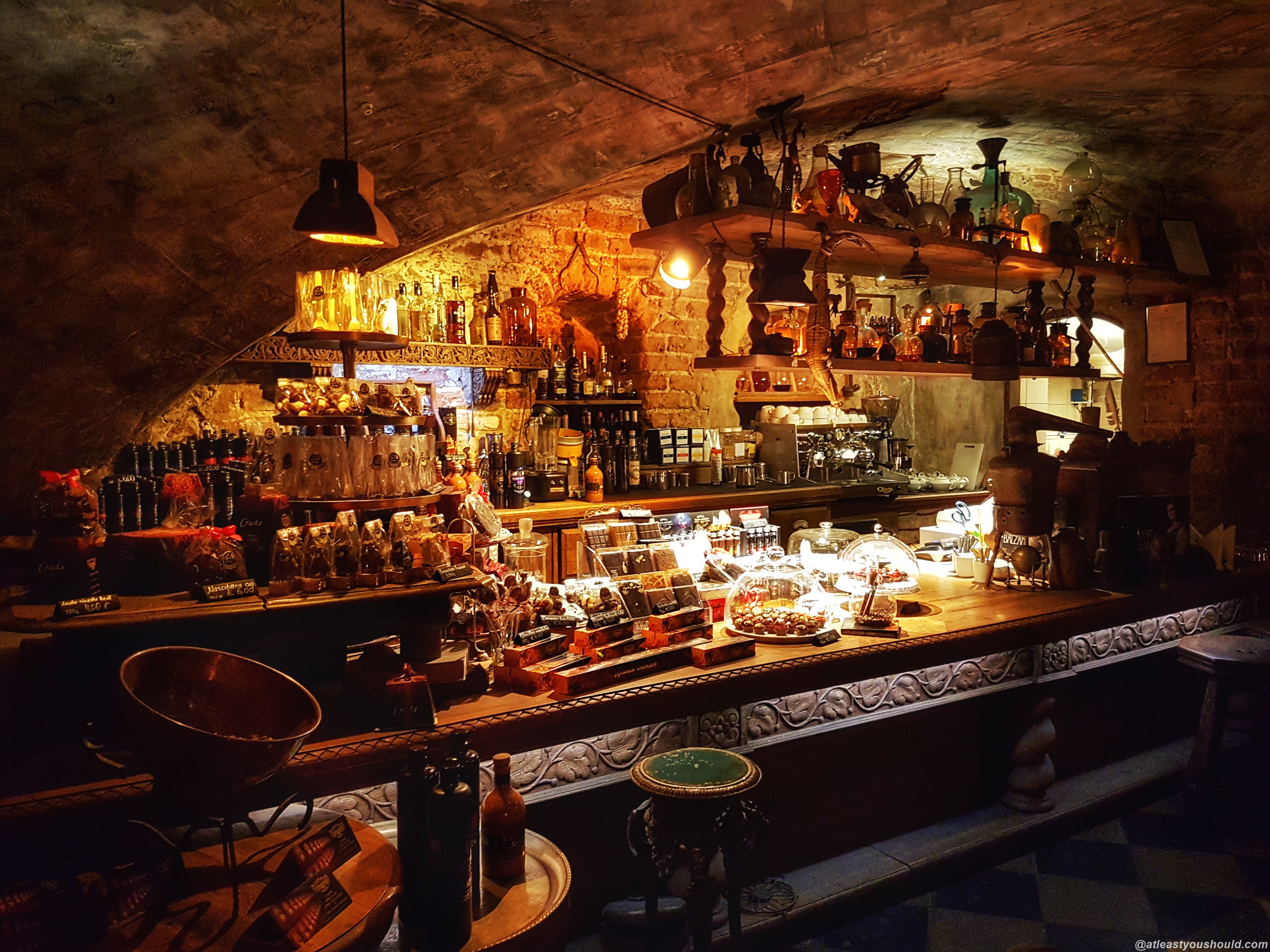 Afterwards we headed to Bastion Hill, with the Freedom Monument, and the Latvian War Museum. Names can be deceiving, we expected a militaristic glorification and actually went in mainly to escape the cold (it had started snowing/raining) but were pleasently surprised. A lot of information about Lativas role in history that I had not been aware of. And entry is free.

We were getting hungry and decided for an early late afternoon dinner. We had already made a selection to go for another “experience”: The Folkklubs ALA pagrabs.

Actually more a bar / event / concert hall than a dinner place, with live music and performances. The closest would be to compare it to one of the traditional taverns or pubs, but it wouldn’t really do it justice. They have over almost 30 different beers on draft and have some very unique flavors. And they have the Big Folk Club beer platter: 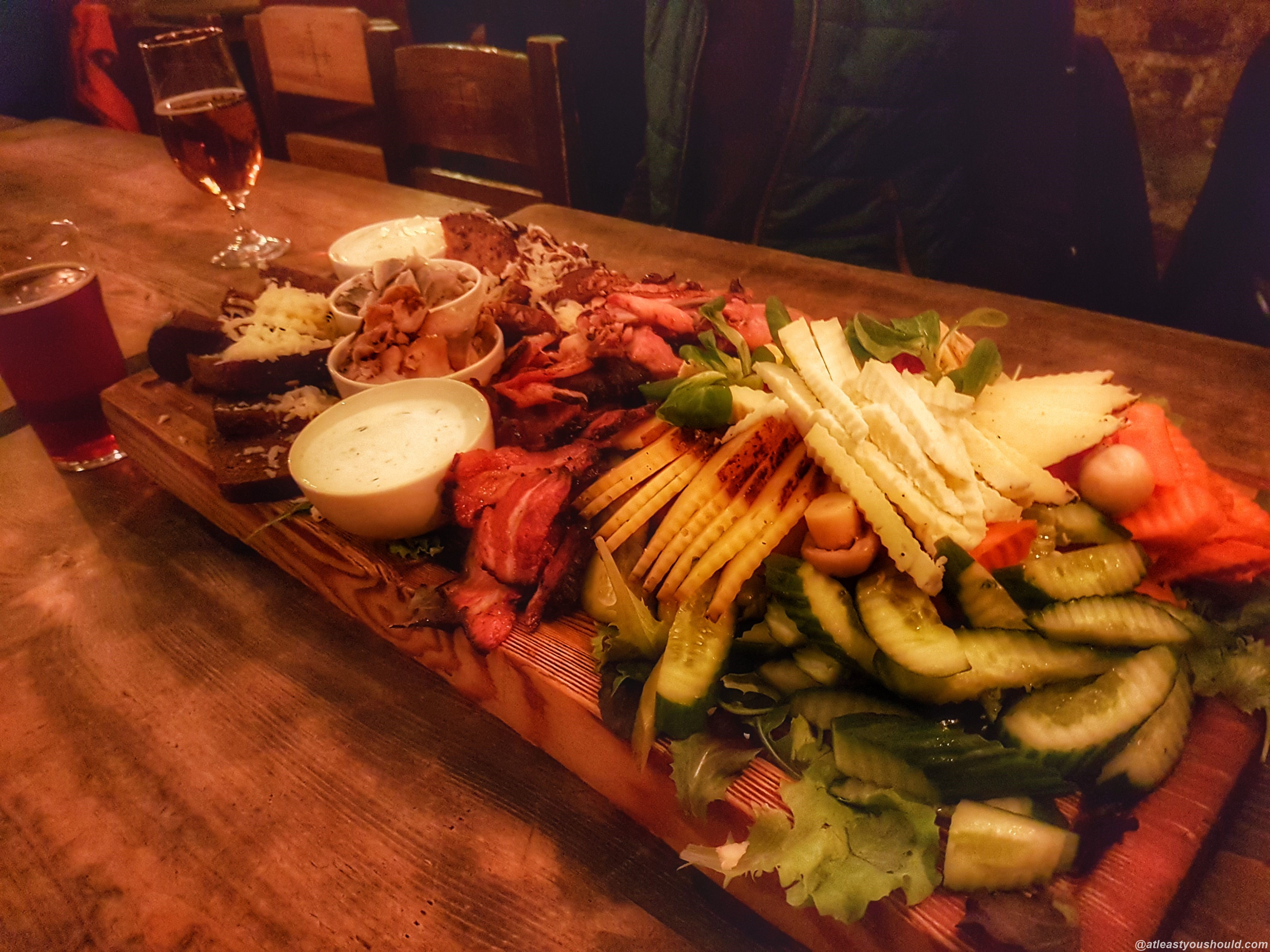 We were so full afterwards and decided to stroll a bit more through the city and then walk back to our hotel (everything is walkable anyway). We made it just in time to stop at Big Bad Bagels on Baznīcas street before they closed. The place is run by two girls and just really cute (both them and the café). My main takeaway from Riga was the young, vibrant creativity of the city – I had expected the exact opposite – and the enchanting little cafés, bars and bagel places you can find. 😉

Definitely one of the greater city trips we had done and we were sad to say goodbye to our friends and fly home that evening.

2 thoughts on “A cold weekend in Riga”