With the extreme heat of this summer, we were looking for a short notice weekend trip to a) escape our frying-pan-hot apartment and b) make use of the excellent weather to explore the nearby region. Just short of a two-hour drive away lies one of the most beautiful regions of Belgium: The Ardenne Forests. The Ardennes are located mainly in southern Wallonia. Centered around the ardennes mountain range, the area also extends into France, Germany, and Luxemburg. The Ardennes are characterized by beautiful lush valleys, amid hilly mountain ranges, thick forests, and the boggy moors of the Haute Fagnes. There are many picturesque villages, châteaus and old (roman) as well as recent (WW1+2) historic sites. So I hope this article can be an inspiration for a short weekend escape.

We departed early to avoid the summer vacation traffic, but not before strengthening ourselves with some croissants and coffee at a local bakery. We did this tour together with our French friends and the two hour drive time passed quickly in cheerful company. Our first stop was Hamoir, a small village just south of Liége located at the Ourthe river, where we got ourselves a rice cake as a second breakfast. Hamoir is quite small, but I had planned to stop here and go Kayaking with the group. Sadly, due to the long lasting dry period, the water levels were too low and kayaking in both Hamoir and Durbuy, our second stop, was not possible. Don’t forget to check out the old town hall of Hamoir

This gave us more time to explore Durbuy, our second stop. Durbuy was an important trade hub in medieval times. With ~400 people, it is the smallest city in Belgium that still retains official “city” rights, making it one of the smallest cities in the whole world. The medieval core around the Castle of Count d’Ursel is almost fully intact and we spent a long time strolling through the streets. 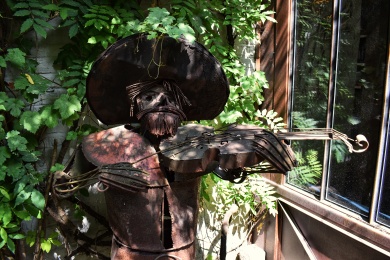 Of course, it is a bit touristy, but still the village – sorry city – is very nice and you should not miss it. Designated parking areas are available (5€/day), or you just park a bit out for free and walk in.

You can see from the aerial shot just how low the water levels of the Ourthe actually were – no chance for kayaking. But I think with normal levels, this would have been a great activity. Prices for food in Durbuy are a higher due to the tourist focus, so we decided not to eat here and continued onwards along the Ourthe river to La-Roche-en-Ardennes.

La-Roche-en-Ardennes features an impressive ruin of a 1000yr-old medieval castle and was the site of heavy fighting in the second world war. Castle access is not free, you pay 6.5€ per person, but you should definitely visit. The views from the top are excellent and, while there are some tourist traps inside (archery, artisan shop), the castle is overall quite intact and you can see the different areas and sections of it. 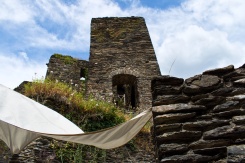 They also have several falcons and hunting owls and do shows with them. I can’t judge whether they were treated well, but it actually was quite a nice experience to watch. 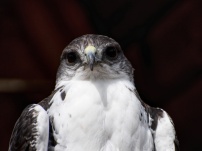 They also have a reconstructed Trebuchet:

It was already early afternoon and getting quite hot, so we went for an extended lunch break after the castle and the second local specialty: Moules frites – Mussles in white wine with fries. Super light obviously. 😉

Getting a good shot of the castle is not so easy – my recommendation is to head up to the Institut Saint Joseph – Sacre Coeur. 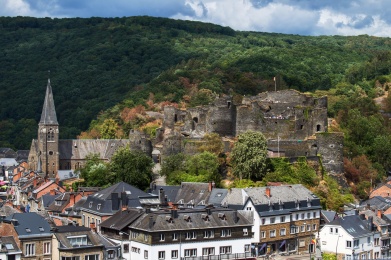 Throughout the city they also have several second world war tanks, if you are interested.

We continued west to the Castle of Vêves, which is still owned privately by the Liedekerke–Beaufort family. It is a fairy-tale like castle and quite impressive. Opening times are very restrictive and when we got there (~16:45) access was not possible anymore. Does not matter much, as the outside is already very nice: 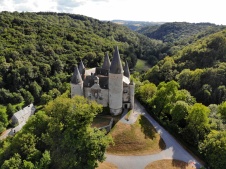 There used to be another castle (ruin) nearby, called Chateau Miranda. It was always listed in the top 10 of lost places and an impressive half-collapsed ruin. Sadly, it is now fully blocked off and torn-down entirely. After visiting the castle (and trying to get to the chateau) we drove on to our last destination for the day: The village of Dinant on the Meuse river. This is the unchallenged highlight of all villages in Wallonia.

Dinant features many historic sights and spots. The Citadell overlooking the city dates back to the 11th century and the Church of Notre Dame de Dinant with its impressive bell tower is over 700years old. There is a cable-car going up to the citadell in peak season. Dinant was also the site of a major battle in the first world war and one famous wounded soldier was Charles de Gaulle, after whom several sites are named in Dinant. The city is also the home of Adolphe Sax – inventor of the Saxophone and you will find many instruments being displayed all over the city. We went here also for musical reasons as this weekend was the Dinant Jazz festival. Since the weather was so amazing, we bought picnic supplies and a bottle of Pastis at a local market, sat down on one of the bridges across the river, listened to the background music and enjoyed the sunset. My first ever picnic in the middle of a bridge! 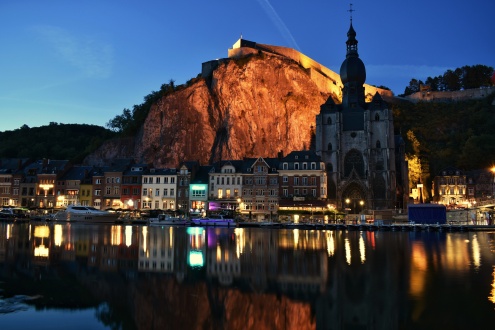 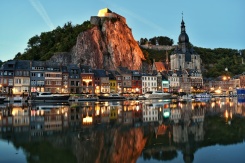 Our hotel for the night was located in Huy, so the next morning we explored the village. Huy also has a local citadell overlooking the river and some nice medieval streets, but it pales in comparison to Durbuy or Dinant. It is also (in)famous as the site of the Tihage Nuclear Power station. So overall – Huy [not recommended].

After breakfast we headed back west and on the way to Liége stopped at Jehay Château. It is under renovation (and will be for a long time), but the gardens are accessible (not nice because it was all dry due to heat, but probably great in autumn) and the church outside is impressive. Most of the area is free, the gardens require a modest fee. On Mondays the site is closed-off. 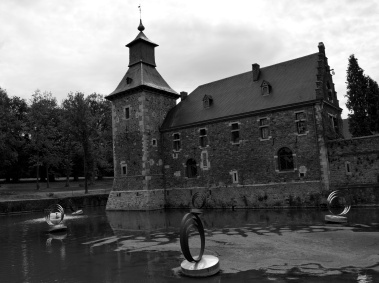 Even under the covers of construction equipment – Jehay is still an impressive site:

After the castle tour we continued towards Liége and its “Batte” sunday market. Thankfully it was a cloudy morning and therefore not too hot. The market is just by the riverfront and you can buy fresh fruit for great prices and many other items of different degrees of usefulness. 😉

After this it was time for yet another local specialty: Gaufre – Belgian Waffles. The absolute best place for this is: Une Gaufrette Saperlipopette in Liége. it is a very small bakery but you will easily find it because of the long queue outside. And be happy if there is a queue –  because the owners will come out and sweeten your waiting time by letting you try their local baked specialties. Very much recommended!

Near the market, you will also find the Grand Curtius. A museum with different alternating exhibitions or actually four museums combined in one. They had an amazing exhibit the time we visited and the café inside is also very nice, as is the building itself, a remnant of the Mosan Renaissance. Some impressions: 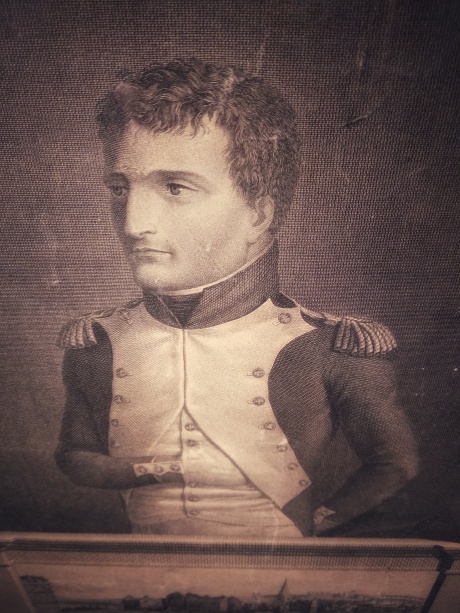 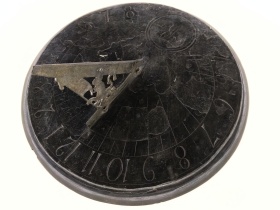 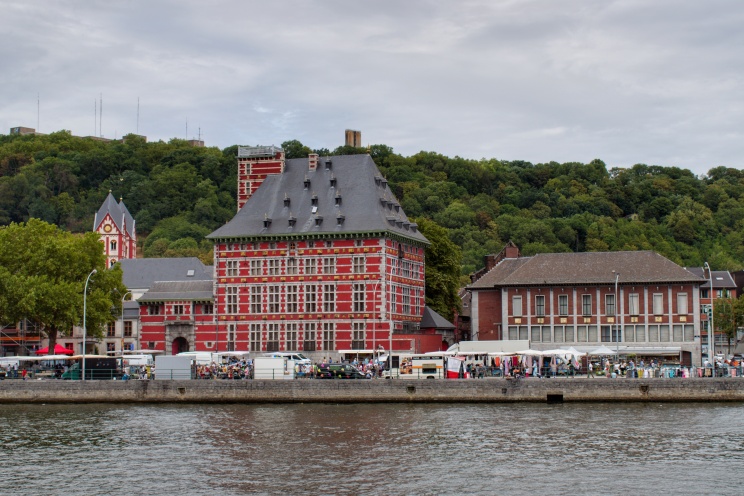 Another stop – which is also good for parking – is the Place Saint-Lambert, with the Liege-Palais and Palais des Princes-Évêques just nearby: 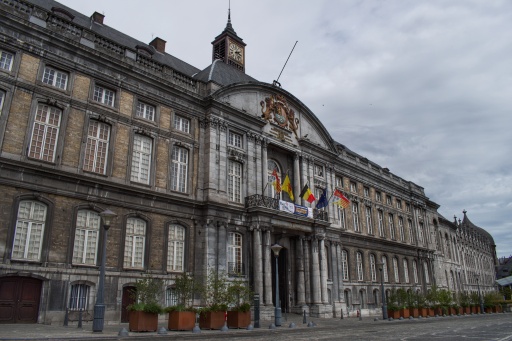 It was already well into the afternoon and we continued towards the German border and into the Haute Fagnes – the High Fens. The high fens are a nature reserve and shortlisted for UNESCO heritage due to their high altitude and unique flora of bogs and moorland. The highest point (and also the highest of Belgium) is the Signal de Botrange at 694m.

The fens offer beautiful walkways and paths – many wooden plankways got destroyed in a major fire around 2011, but most have been repaired. We spent the rest of the afternoon on some hikes through this area and enjoyed the cool breeze. 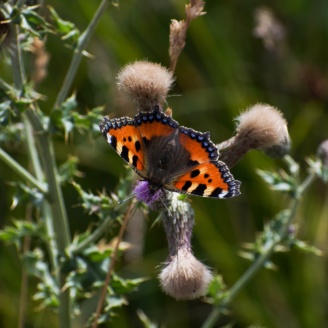 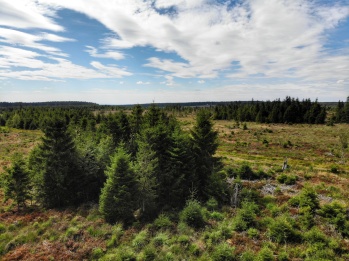 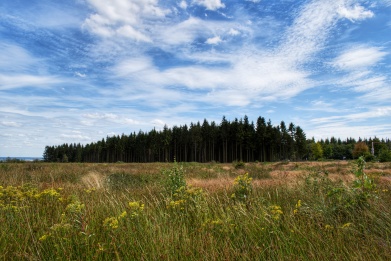 One last and quite typical image of the High Fens, before resupplying with local blueberry cake and heading home from this short and relaxing weekend escape.

The main attractions in the Ardennes are the little villages and châteaus in between the river valley and hills.

Local food you should try: